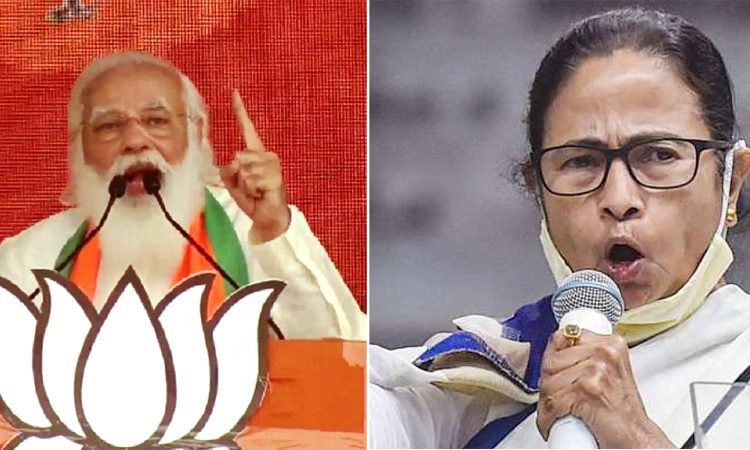 Kolkata/Siliguri, March 7: Prime Minister Narendra Modi Sunday accused Mamata Banerjee of “betraying and insulting” the people of West Bengal, provoking an angry retort from the chief minister who called him a “liar”, as the two leaders shot vicious barbs at each other at the hustings.

Addressing his first rally in West Bengal at Kolkata’s Brigade Parade Ground after the announcement of state assembly polls, Modi accused Banerjee of nepotism by choosing to play the insular role of “bua” (aunt) to her “bhatija” (nephew) instead of becoming “Didi” (elder sister) to the people.
Nearly 600 km away in North Bengal’s Siliguri, the TMC supremo held a foot march and addressed a rally where she alleged the Prime Minister was “peddling lies to mislead voters” in her state, where an eight-phase polling will take place between March 27 and April 29.
“You have betrayed and insulted the people of Bengal who trusted that you will be the harbinger of change after the end of the Left rule. You smashed to smithereens (chaknachoor) their hopes and dreams,” Modi said, excoriating the TMC supremo.
“Bengal chose you in role of ‘Didi’ but you preferred being ‘bua’ to your ‘bhatija. Aren’t you the ‘Didi’ of so many young men and women who look up to you? Why are you fulfilling the greed of your nephew?” he said without naming Mamata’s nephew Abhishek Banerjee.
The BJP has been accusing Banerjee of trying to install her nephew and Diamond Harbour MP Abhishek as the next chief minister.
A combative Banerjee warned the people of West Bengal against the BJP’s “riot mongering” and the “grave threat” the state faced from “divisive forces”.
“The people of Bengal, who had been living in peace casting aside barriers of community and language, would come under grave threat if a divisive force such as the saffron party comes to power in the state,” she said.
She also wanted to know why the Modi government has not yet deposited Rs 15 lakh in the bank accounts of every citizen, as he had promised before the 2014 Lok Sabha polls.
“You have made many empty promises. People will not accept your falsehood every day. We demand you make LPG cylinder affordable to every citizen of the country. You have made LPG cylinders inaccessible for the common man,” Banerjee said, claiming oil prices have come down aross the world.
“Before the polls it is Ujjwala (the free LPG connection scheme for poor) and post polls that turns into ‘Jumla’ (empty promise). This cannot continue any more. The poor should be given cooking gas for free,” she demanded, calling “Modi-Shah regime” a “big-time extortionists”.
At his rally in Kolkata, attended by lakhs of frenzied BJP workers and supporters, beating drums and dancing feverishly, Modi hit back at rival leaders like former Congress president Rahul Gandhi and Banerjee, who often accuse him of favouring his industrialist friends.
“All 130 crore people of India are my friends, I work for them. I gave 90 lakh gas connections to my friends of Bengal. I have special affinity with tea, and the tea garden workers of Bengal are my friends for whom I have implemented a social security scheme, I am friend (dost) of the poor,” he asserted.
Modi has often spoken about how he used to sell tea at a railway station and on trains as a small boy.
He also attacked Banerjee for triggering the insider- outsider debate.
“When those believing in Marx and Lenin (a reference to the Left) and a party like the TMC, an offshoot of the Congress, are parties of insiders, how the BJP, for whose foundation Syama Prasad Mookerjee was the source of inspiration, can be a party of outsiders,” he said.
The Prime Minister said he was committed to bringing about “asol parivartan” (real change) in West Bengal where all sections of people progress but nobody is appeased, and infiltration is stopped.
On the other hand, Banerjee wanted to know how much money the Modi government got from the sale of stakes public sector undertakings like “Railways, Air India and Coal India. How much money changed hands in Ujjwala Yojana graft? The entire country knows about the Modi-Shah syndicate.”
Banerjee said the Prime Minister should be “ashamed of the habit of telling lies and inviting dishonour” to his position.
As national TV channels broadcast the two events nearly simultaneously, Modi attacked Banerjee for triggering the insider-outsider debate.
Modi said Banerjee wanted to portray herself as Bengal’s daughter when she was the “daughter of India”, as he tried to take the wind out of the sails of the TMC over her “Bengali pride” offensive against the BJP.
Taking a dig at TMC over its “Khela Hobe” slogan, he asserted “Khela (game) is khatam (over) for the TMC, vikaas shuru (development begins now).”
“The people of Bengal had once put faith in Didi that she will bring paribartan (change). But Didi and her cadre destroyed the faith of people and insulted Bengal. True change means peace and development, better education, more jobs and fulfilling everyone’s dreams. We will rebuild Bengal,” said Modi.
Modi said the TMC and the Left-Congress alliance are on one side and the people of Bengal on the other. “The vote bank politics that Congress started after Independence, the Left and the TMC took forward.”
Attacking the Left for forming an alliance with the Congress, Modi said, “They (the Left) used to once raise a slogan–Congress-er kalo haath bhenge dao, guriye dao (Break the black hand of Congress). But that black hand has become white now and the Left has tied up with the grand old party.”
Accusing Banerjee of “destroying democracy” in the state, Modi said corruption flourished during the TMC rule.
“Under Mamata Banerjee, only corruption and syndicate raj has flourished. Loktantra (democracy) has vanished and loot tantra (the culture of plunder) has prospered. People of Bengal are not getting the money disbursed under central schemes. TMC is standing in the way of the state’s development,” he alleged.
Modi took a jibe at Banerjee over riding a scooty precariously during a TMC protest in Kolkata against spiralling fuel prices and linked it to her decision to contest the assembly eletion from Nandigram against her former protege Suvendu Adhikari who has joined the BJP.

“We all prayed for your safety. Thankfully, you did not fall down or get hurt. But now when your scooty, instead of going to Bhawanipore, has turned towards Nandigram and it decides to flip, what can we do?” Modi said as he had a hearty laugh.
“Lotus is about to bloom in Bengal because of the ‘kichad’ (muck) created by you, Didi,” he said, attacking the TMC boss over alleged “communally divisive” politics.
Never to take things lying down, Banerjee accused the BJP of targeting Bengal’s icons.
“Your party vandalised (Ishwar Chandra) Vidyasagar’s bust. Your party dishonoured Birsa Munda. Your party wrongly said Rabindranath Tagore was born in Santiniketan. This shows your depth of knowledge of Bengal and its culture,” she said. (PTI)