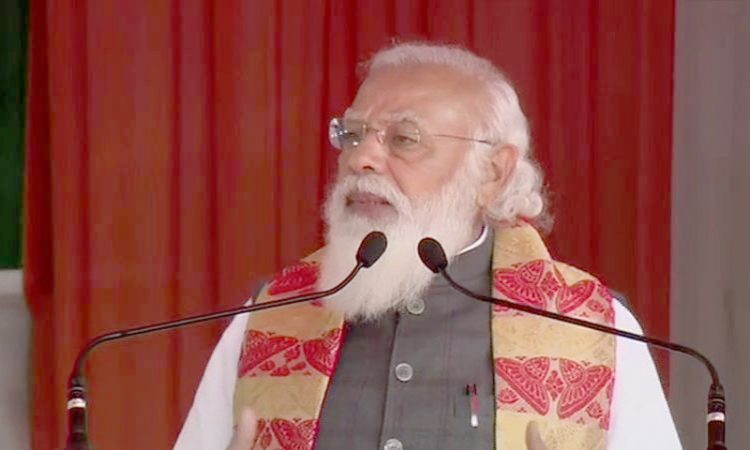 Dhekiajuli (Assam), February 7: Prime Minister Narendra Modi Sunday claimed an international conspiracy has been hatched to “defame” Indian tea, on a visit to Assam, a major producer of the brew.

On a second visit to the election-bound state in a fortnight, he also pitched for setting up at least one medical college and a technical institution in each state that will impart education in the native language.
He was addressing a gathering after launching ‘Assam Mala’ scheme to upgrade state highways and laying the foundation for two medical colleges.
Modi said he always linked the condition of tea garden workers to the development of Assam.
“But documents have emerged to show that a conspiracy has been hatched outside the country to defame Indian tea. I am sure the tea workers from Assam will give a befitting reply.
“No tea garden worker in Assam can tolerate this attack and I am sure they will win this fight against these conspirators as they are stronger than these forces with vested interest,” he said.
The prime minister was apparently referring to NGO Greenpeace’s report about alleged overuse of pesticides in Indian tea industry.
He said the Centre had earmarked Rs 1,000 crore for the tea sector in the budget and an assistance of Rs 3,000 was extended to each tea garden worker of Assam on Saturday.
Mobile medical units were also functioning in tea gardens, he said.
Modi also spoke about his dream of imparting medical and technical education in mother tonue.
“I have a daring dream of each state having at least one medical college and a technical institution imparting education in the local language,” he said, promising setting up such institutions in Assam after the assembly elections.
He said this will improve medical services in remote areas as more and more doctors will be able to reach out to people in their mother tongue and understand their problems.
The two medical college and hospitals will come up in Biswanath and Charaideo districts.
In India, teaching and learning have largely been in a foreign language but that could change with the advent of the National Education Policy (NEP) 2020.
“Taking inspiration from the National Education Policy, it will now be tried to teach all technical courses including medical, engineering in mother tongue,” Modi had tweeted after the unveiling of the NEP.
He claimed Assam has witnessed unprecedented development in the last five years with increased health and infrastructure development.
Until 2016 there were only six medical colleges in the state but six more were added in just five years. The number of seats in medical colleges have gone up from 725 to 1,600 now, he said.
The prime minister said the ‘Asom Mala’ scheme will lead to creation of new oppurtunities. Under the scheme the Public Works Department (PWD) will upgrade the state highways.
“Five years ago, having good hospitals in the state was a dream and people hoped that there would be no medical emergency in the family as it meant long hours of travel, waiting and countless difficulties along the way. But now you can see and feel the difference,” he said.
The All India Institute of Medical Sciences being set up in Guwahati will emerge as a hub for modern medical facilities not only for Assam but the entire North East after its completion in two years, he said.
“Why was an AIIMS not set up in the region earlier? The earlier government was far too distant and didn’t realise it was needed here,” he said.
Taking a lesson from the impact of COVID-19 on health infrastructure, budgetary allocation for the health sector has been significantly increased and the government is planning to set up integrated medical laboratories in 600 small towns and villages, he said.

The prime minister said the ‘Asom Mala’ scheme will change the infrastructure scenario during the next 15 years, heralding an era of efficient transportation of people and goods across the state and fuelling economic growth.
The Asom Mala scheme, with an outlay of Rs 8,210 crore, will provide inter-linkage between highways and rural roads and high speed corridors.
“The day begins early in the northeast but the dawn of development arrived in the region after a long wait marked by violence, deprivation, tension, discrimination and struggle,” he said. (PTI)