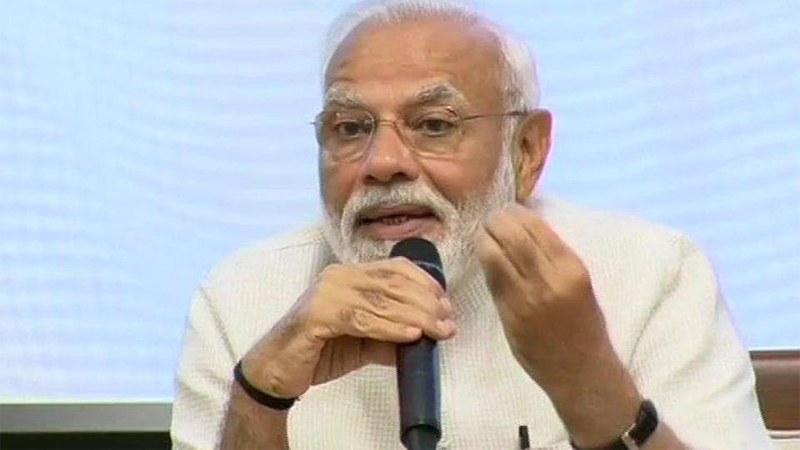 NEW DELHI, June 10: Prime Minister Narendra Modi Monday asked top bureaucrats to prepare a five-year plan for each ministry with welldefined targets and milestones in sync with the people’s mandate in the election to change the status quo and improve quality of life, officials said.
In a meeting with secretaries of all ministries, the prime minister said each ministry should come out with an “impactful decision” for which approvals will have to be taken within 100 days, they said.
The prime minister said people were yearning for a better life and the government must focus on ensuring ease of living, and asked the officials to begin work on making India a five-trillion dollar economy.
“Modi said that the huge expectations of the people should not be viewed as a challenge, but an opportunity. He said the mandate reflects the will and aspirations of the people to change the status quo, and seek a better life for themselves,” a government statement said.
The meeting was also attended by union ministers Rajnath Singh, Amit Shah, Nirmala Sitharaman and Jitendra Singh.
“The prime minister said that the Indian voter has outlined a vision for the next five years, and this is now an opportunity before us,” it added.
Speaking about the demographic dividend, Modi said it was essential that the demographics be utilized efficiently.
He said every department of the union government, and every district of each state has a role to play in making India a five-trillion dollar economy, the statement said.
The prime minister touched upon the importance of the ‘Make in India’ initiative, and the need to make tangible progress towards this end.
Modi also that India’s progress in ease of doing business should reflect in greater facilitation for small businesses and entrepreneurs, adding each ministry should focus on it.
“The prime minister said water, fisheries, and animal husbandry, will also be important areas for the government,” the statement said.
He said that during the interaction, he has seen that secretaries have vision, commitment and energy to take the country forward.
“Modi said he is proud of the team. He urged everyone to use technology to improve outcomes and efficiency in each department,” said the statement.
The prime minister said that all departments must seek to leverage the upcoming milestone of 75 years of independence, which can inspire people to make a contribution for the betterment of the country.
He urged everyone to hit the ground running, to fulfill the aspirations of the people.
The discussion at the meeting was initiated by Cabinet Secretary P K Sinha.
Sinha recalled how the prime minister has interacted directly with all officers up to director/deputy secretary level, in the previous tenure of the government.
During the interaction, secretaries shared their vision and ideas on subjects such as administrative decision-making, agriculture, rural development and Panchayati Raj, IT initiatives, education reform, healthcare, industrial policy and economic growth, the statement said.
In the meeting, Modi also recalled his first such interaction with the secretaries in June 2014.
“He said the recent General Elections have been marked by pro-incumbency, for which credit must go to the entire team of officials, which worked hard, conceived schemes, and delivered excellent results on the ground, over the last five years,” said the statement. (PTI)