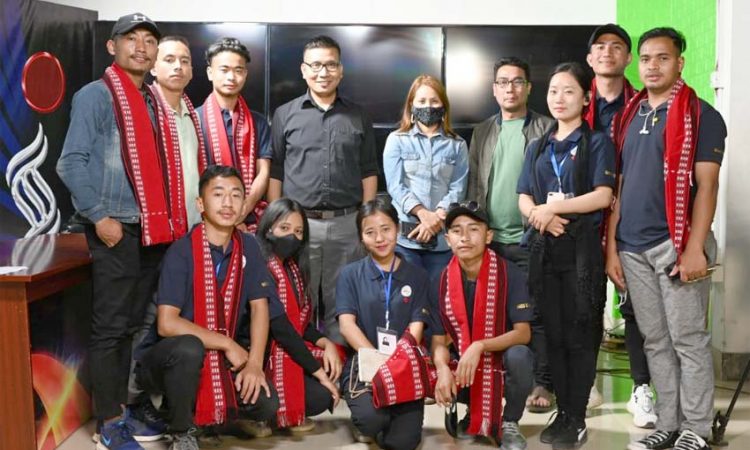 The study tour is part of the course ‘Media Interface’. The visit to the media and entertainment industries is targeted at enabling the students to gain first-hand knowledge about the organizational structures and modes of operation in different industries.
The students guided by Assistant Professor Rojenn Wahengbam during the tour interacted with eminent media personalities of the State. Publisher Laishram Shamunguo and Production Manager Mercy Roy of Sangai Express in their deliberation with the students gave an insight on the production and management of print media houses.
Students also visited electronic media houses such as Times of Manipur and Impact TV. Shalam Shanti and Paree Khuman, executive editor and video editor respectively of the Times of Manipur explained to the students about live studio recording and other production works. Shanti while sharing her journey working with CNN-IBN, NDTV, said, “As a media person one should have listening power and listen to what people have to say to be able to deliver truth to power.”
Bureau Chief Prem Aribam and Associate Editor Joyshree Usham of Impact TV showed the students various units of their media house while underscoring the importance of unbiased and objective reporting and the characteristics of different video productions such as panel discussions, reality shows, news bulletins.
Editor Raj Nongthombam of Impact TV speaking on power of media said, “Don’t treat your degree as a normal degree. It is a very powering course and use it accordingly to be of help to the society”.
The students were taken to film shooting sites such as Living Tree at Sangaiprou and Chumthang Sanapung wherein they interacted with actors Kaiku and Angelina. Director Pinky Tentha spoke about his journey in the field of film making.
During the tour, the students visited a vernacular press, Hueiyen Lanpao where they had the opportunity to interact with Editor, Dr Athouba Meitei and Managing Editor Maisnam Karnajit. The students were taken around the newspaper office and had the opportunity to see a newspaper printing machine.

On the last day of the tour, the students were taken to various tourist destinations such as Kangla Palace, Loktak Lake and Khongjam War Memorial.
(Page News Service)