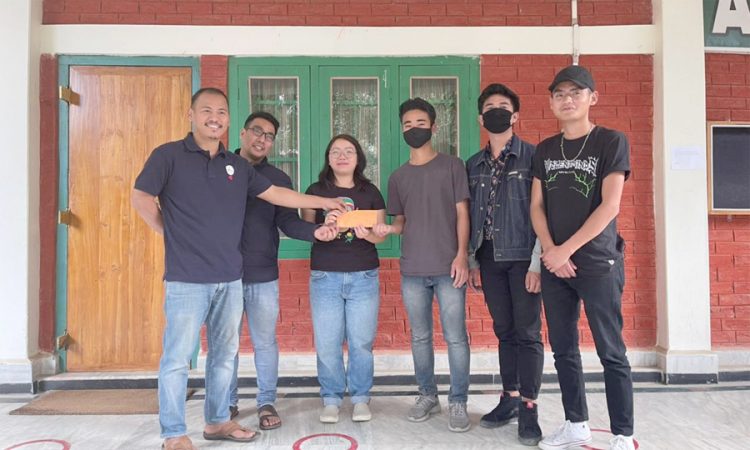 Dimapur, March 7: In a novel gesture, the final year students of Patkai Christian College’ Mass Media and Mass Communication surprised the department by donating a sum of Rs 23,000 on March 6.

It was given to HOD for departmental activities including field assignments of the juniors to meet the curriculum. The students of batch 2018 collected the money among themselves after earning the same through independent projects as well as prize money earned by participating in a state competition.
It must be mentioned here that the batch had won the 2nd prize and consolation prize in the short film festival organized by Nagaland State Aids Control Society on the occasion of World AIDs Day in December 2020.
The students donated a part of the money to the department after meeting the expenses involved in making the films. Another team of the same batch took up a commercial project and gave part of their earnings to the department.
Khichamo Ezung, Rutu Thurr, Souchuto Ngouri, Randanbeni Patton and Sunil Nayak handed over the money to HOD MMC, Dr. Dakter Esse on behalf of their batch.
The HOD appreciated the students for their selfless and giving attitude and urged them to strive for excellence in the field.
The 2018 batch will be the first batch to graduate this year with a degree in Multimedia and Mass Communication from PCC. Patkai is one of the few colleges to offer a degree course in MMC in undergraduate level.
(Page News Service)