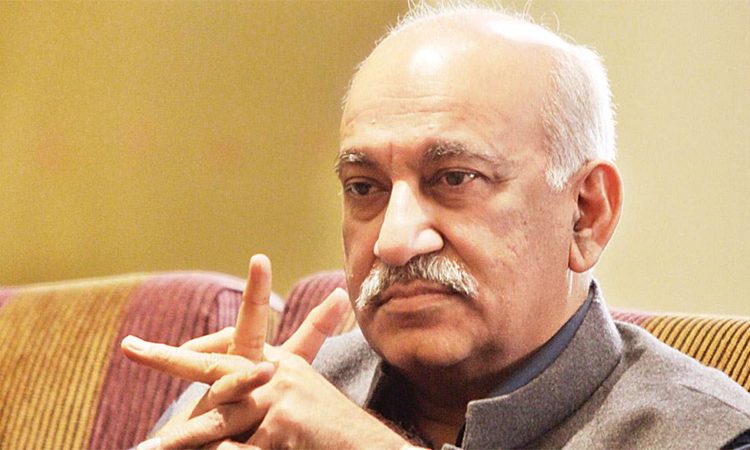 New Dehi, October 17: Minister of State for External Affairs MJ Akbar resigned from his post on Wednesday. His resignation comes in the wake of a series of allegations of sexual harassment levelled by at least 16 women.
The journalist-turned-politician had earlier filed a criminal defamation case against one of his accusers, Priya Ramani, who was the first to level charges against him.
In a statement issued to the media, Akbar said the accusations against him were false and that he would fight them in a “personal capacity”.
“Since I have decided to seek justice in a court of law in my personal capacity, I deem it appropriate to step down from office and challenge false accusations levied against me, also in a personal capacity,” he said.
“I have, therefore, tendered my resignation from the office of Minister of State for External Affairs,” he said, adding that he is “deeply grateful” to Prime Minister Narendra Modi and to External Affairs Minister Sushma Swaraj for the “opportunity they gave me to serve my country”.
Prime Minister Narendra Modi on Wednesday accepted the resignation of M J Akbar from the council of ministers, official sources said.
According to the established procedure, the resignation will now be sent to the President.
Union Minister MJ Akbar’s decision to resign from his post in the face of rising allegations of sexual harassment against him found widespread approval on social media today, with many women journalists — including Priya Ramani, who was the first to accuse the editor-turned-politician — stating that it vindicated the charges they had levelled against him. They, however, insisted that their fight was far from over.
“As women, we feel vindicated by MJ Akbar’s resignation. I look forward to the day when I also get justice in court,” tweeted Ms Ramani, who has been named in a defamation case, soon after the Minister made the announcement.
Incidentally, even cabinet colleague Ramdas Athawale termed Mr Akbar’s move as the right one. “The opposition was asking him to resign on moral grounds, and he took the right decision. The allegations against him (Akbar) should be properly investigated,” he said. Actor-turned-politician Khushbu Sundar, Journalist Saba Naqvi and Aam Aadmi Party leader Atishi Marlena were among other public figures who hailed the development as a victory of womankind over “sexual predators”.
As the #MeToo movement gained ground, 20 women journalists who worked with ‘The Asian Age’ newspaper came out in support of their former colleague Priya Ramani.
The journalists have urged the court to hear their testimonies against Akbar, claiming that some of them suffered sexual harassment by the minister and the others had been a witness to it.
“Ramani is not alone in her fight. We would request the honourable court hearing the defamation case to also consider the testimonies of sexual harassment of some of us at the hands of the petitioner, as also of the other signatories who bore witness to this harassment,” the journalists said in the joint statement undersigned by them.
Akbar, who returned from an official tour of Nigeria on Sunday, had issued a statement claiming that the allegations against him are “false and fabricated”.
“The allegations of misconduct made against me are false and fabricated, spiced up by innuendo and malice. I could not reply earlier as I was on an official tour abroad,” he said in a statement issued shortly after arriving in New Delhi.
Akbar, who was a reputed journalist before he joined politics, had then said that he will take legal action against the accusers adding that his lawyers will look into the “wild and baseless allegations”.
“Accusation without evidence has become a viral fever among some sections. Whatever be the case, now that I have returned, my lawyers will look into these wild and baseless allegations in order to decide our future course of legal action,” he said.
On Monday, 15 October, Akbar filed a criminal defamation suit against Ramani before the Chief Metropolitan Magistrate in Patiala House Court.
Ramani had on 8 October posted a tweet naming Akbar, which inspired other journalists to come out with their own stories of alleged harassment at the hands of the journalist-turned-politician.
While claiming innocence, Akbar had also given the allegations a political colour by questioning their timing before the Lok Sabha elections 2019.
“Why has this storm risen a few months before a general election? Is there an agenda? You be the judge. These false, baseless and wild allegations have caused irreparable damage to my reputation and goodwill,” he said in his first statement after returning to India.
“Priya Ramani began this campaign a year ago with a magazine article. She did not however name me as she knew it was an incorrect story. When asked recently why she had not named me, she replied, in a Tweet: ‘Never named him because he didn’t ‘do’ anything.’,” Akbar said.
“If I didn’t do anything, where and what is the story? There’s no story. But a sea of innuendo, speculation and abusive diatribe has been built around something that never happened. Some are total, unsubstantiated hearsay; others confirm, on the record, that I didn’t do anything,” he added.
In her statement, Ramani said that she is ready to fight the allegations Akbar levelled against her.
“I am ready to fight allegations of defamation laid against me, as truth and the absolute truth is my only defence,” she said.
Ramani added that she was deeply disappointed that a Union minister should dismiss the detailed allegations of several women as a political conspiracy.
“By instituting a case of criminal defamation against me, Mr Akbar has made his stand clear: rather than engage with the serious allegations that many women have made against him, he seeks to silence them through intimidation and harassment,” Ramani said in her statement.