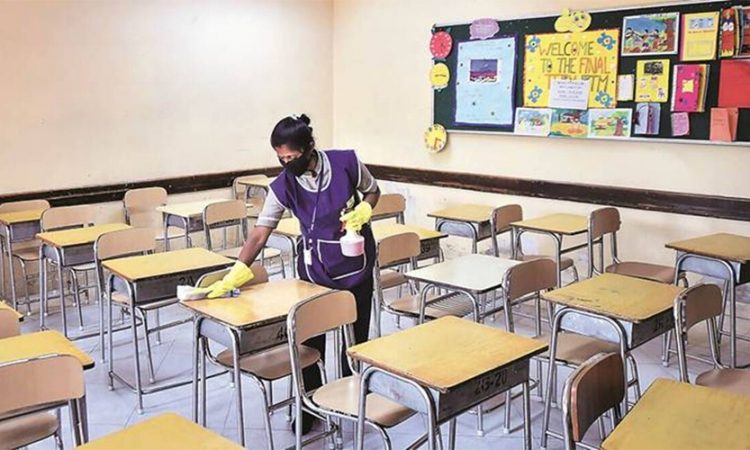 Aizawl, April 10: Mizoram will close down schools for students of class eight and below following a spike in COVID-19 cases in the state, a new guideline issued by the state government which came into effect on Saturday said.

Schools for students of classes five to eight were reopened on March 1 and for classes three and four on April 1.
Interview of ministers has been suspended for the time being, the guideline issued on Friday night said.
The state government has also banned night church services and extended the duration of the existing night curfew in the state capital town of Aizawl and the district headquarters in view of the second COVID-19 wave, it said.
According to the new guideline, only online classes will be conducted for students of class eight and below as normal classes have been suspended with immediate effect.
The proposed opening of schools for the new academic session 2021-2022 on May 4 for all classes – Nursery to class 12 too has been cancelled or reversed until further orders.
This covers all schools, including those under the Central Board of Secondary Education board, the guideline said.
However, the ongoing exams for classes 9 to 12 will continue till they are completed.
Classes in universities and colleges will be subject to the decision taken by the state’s higher and technical education department, it said.
The night curfew was extended from its earlier 10 pm to 4 am to 8.30 pm to 4 am in all district headquarters.
Night church services were allowed twice a week after the opening of religious places in the state in March.
Congregational singing and any singing in the form of solo, duet and quartet are strictly prohibited in church and any other gatherings, the guideline said.
Churches, cinema halls, auditoria, community halls, picnic spots and other places of entertainment like resorts are allowed to open with 50 per cent of their sitting capacity.
The number of attendees at a funeral, wedding and any social or political gathering is fixed at 50, it said.
Shops, hotels, restaurants and other business establishments will open under strict adherence to COVID-19 protocols.
The guideline said that all returnees from other states will be screened with rapid antigen test and those tested negative will be placed under home isolation for seven days with self-monitoring.
However, they will not require to go for home quarantine if they test negative through RT-PCR and Truenat laboratories.
Returnees from abroad or new COVID-19 variant affected states will have to be quarantined at designated facilities.
But if they have already stayed 10 days in the country after arriving and tested negative during screenings at the entry points here, they will be allowed seven days home isolation.

Quarantine is not mandatory for people who visit the state on a short stay not longer than 96 hours provided they possess a COVID-19 negative certificate from ICMR recognised RT-PCR or Truenat or CBNAT labs. The certificates should not be older than 96 hours upon their arrival in the state, the new guideline said.
Mizoram on Saturday reported 25 new COVID-19 cases taking the state’s tally to 4,583, health department official said.
The state now has 115 active cases, while 4,457 people have recovered from the infection.
At least 11 people have succumbed to the disease so far, the official added. (PTI)