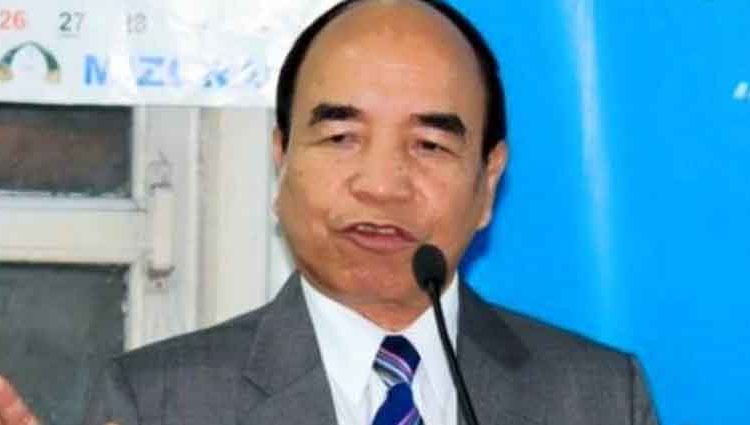 Aizawl, April 26: Mizoram Chief Minister Zoramthanga Monday thanked the Centre for extending help to the Northeastern state by deploying IAF choppers to douse the forest fires raging in several parts of the state.

Prime Minister Narendra Modi spoke to the chief minister during the day and offered him the Centre’s full support to deal with the forest fires which have damaged vast tracts of land and vegetation.
The chief minister had requested the Indian Air Force (IAF) for help to put out the blaze in Lunglei and surrounding areas.
According to an official, IAFS Mi17 helicopter commenced fire fighting operation, with Bambi Buckets, in Zotlang area of Lunglawi town around 3:55 pm.
A recce was conducted in the affected areas in the morning.
“Thank you so much Prime Minister Shri @narendramodi ji. I thank the Central Government for its prompt assurance and swift action. The people of #Mizoram says ‘Kan lawm e,” Zoramthanga tweeted.
According to officials, forest fires broke out in at least five districts- Lunglei, Lawngtlai, Hnahthial, and Siaha, in the southern part of the state, and Serchhip district in central Mizoram prompting the state government to seek help.
However, no human casualty has been reported so far.
Of the five districts, Lunglei and Lawngtlai districts are the worst-affected.
Lunglei district additional deputy commissioner M.
Misael told PTI that the wildfire which broke out on Saturday morning in the Saisih area in the outskirts of Lunglei town has spread to more than 8 localities within the town.
According to an official statement, about 90 per cent of the blaze in Lunglei was doused till Monday evening after the IAF chopper was put into action.
An eight-member IAF team will have a night halt in Lunglei and resume operation in the town on Tuesday, if necessary, it said.
Meanwhile, state additional principal chief conservator of forests Keyiekhrie Kire said that about 427.88 hectare has been ravaged by the wildfire in Lunglei district since Saturday.
An official of the fire and emergency services said that at least 12 houses at Bungtlang South village in Lawngtlai district were gutted on Sunday.
Champhai district deputy commissioner Maria CT Zuali also told PTI that forest fire has been reported from more than seven places in Champhai district since April 21.
However, the situation in the district is now under control, she said.
Over 450 incidents of fire have been reported in Mizoram since early 2019 claiming at least seven lives and injuring 11, fire statistics recorded by the fire and emergency services of the state home department said.
According to data accessed by PTI, at least 459 fire incidents were reported from January, 2019 to March, 2021 of which 346 were forest fires.
Fire and Emergency Services director C Lalthanmawia said that the number of forest fire is comparatively high this year against last year.

While 50 forest fires were reported between January and March last year, the figure reached 133 in the first thee months this year, he said.
He said, the practice of slash and burn (jhum) cultivation was the main cause of forest fires in the state.
At present, there are 14 fires stations across the state and the government is making efforts to set up new fire stations in three new districts- Hnahthial, Saitual and Khawzawl, Lalthanmawia said (PTI)