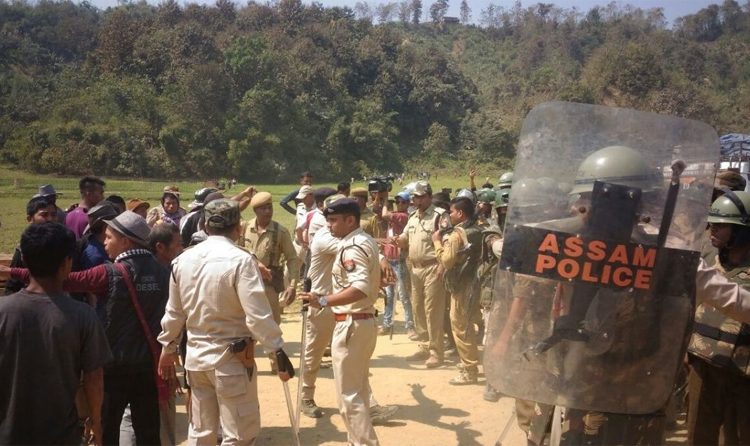 Aizawl/Hailakandi, June 30: Tensions between Assam and Mizoram escalated as officials of the two states traded charges of encroachments in each others land.
While Mizoram on Wednesday accused Assam of encroaching upon its land in the Kolasib district which borders Assam, Assamese officials and legislators accused Mizoram of building structures and planting betel nut and banana saplings allegedly ten kilometers inside Hailakandi in Assam.

This comes days after Assam Chief Minister Himanta Biswa Sarma said he was working to bring about settlements with all bordering states.
Kolasib district’s superintendent of police Vanlalfaka Ralte claimed that over a hundred officials and policemen led by Assam’s Hailakandi district deputy commissioner and SP entered Mizoram’s territory and have been camping there since Tuesday.
The area, locally known as Aitlang hnar or the source of river Aitlang, is considered to be part of Mizoram and is about 5 km from Vairengte village in Kolasib district which borders Assam.
However, Katlicherra’s AIUDF MLA Suzamuddin Laskar alleged that residents of Mizoram have encroached around ten kilometers of Assams land in Chuninullah, Aisonanglon villages under Dholcherra-Phaisen bordering area.
Assam government officials added that a team from Hailakandi comprising Divisional Forest Officer Montaj Ali, Border DSP Nirmal Ghosh and others rushed to the border but were stopped by Mizo encroachers and forced to return.
The residents of Vairengte work on plantations in the area, which they claim belongs to Mizoram since time immemorial, Ralte said.
A host of district officials and police personnel from Assam arrived and forcefully seized the area on Tuesday, he alleged.
“It is pure aggression by the neighbouring state as the area belongs to Mizoram. The local farmers were forced to flee for fear of being attacked by armed personnel,” Ralte, who is currently camping at the site, told PTI.
Officials of both states held a discussion at the site on Tuesday but Assam officials refused to withdraw from the area, he alleged.
Residents of Vairengte, who rushed to the site, were however sent back home to prevent violence, the police officer added.
Kolasib’s deputy commissioner H Lalthlangliana is also in the area.
Three districts of Mizoram — Aizawl, Kolasib and Mamit — share about a 164.6 km border with Assam’s Cachar,Karimganj and Hailakandi districts.

The border dispute between the two neighbouring states is a long pending issue. Several dialogues held since 1995 to resolve the dispute yielded little result.
After a massive tussle in 2018, the border row resurfaced in August last year. The matter further escalated in February but was defused after a series of parleys with the intervention of the Centre.
In an interview to PTI earlier, Assams chief minister said “Resolving border disputes among our sister states (is) among the important objectives of my government.” (PTI)