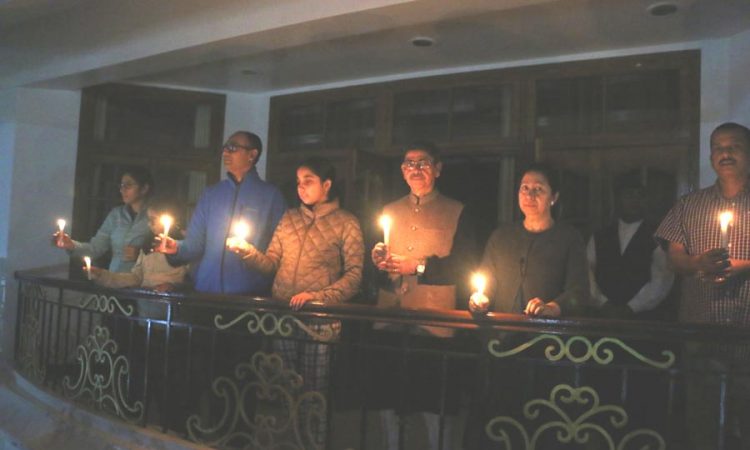 Governor Nagaland, RN Ravi, his lady wife and others lighting candles in support of the clarion call by PM Modi to show "solidarity and confidence in the collective fight" against the Covid-19 at Raj Bhavan Kohima on 5th April 2020.

New Delhi/Dimapur, April 5: Millions of Indians across the country switched off lights at their homes and lit candles, diyas or turned on mobile phone torches on Sunday night, responding to Prime Minister Narendra Modi’s appeal to show the nation’s “collective resolve and solidarity” in its fight against coronavirus.
As the clock struck 9, lights went out in most houses and people gathered in balconies and at doors, flashing mobile lights while many lit candles and diyas. Fireworks, thalis, whistles and police sirens were heard. At some places, Hindu devotional songs, mantras and national anthem were also played.
Nagaland responds to PM’s appeal
In Dimapur, people came out of their homes and light diyas, candles and even flashed their mobile phones for almost 10 minutes, while some enthusiastic people even burst crackers to lit up the sky.
Though people were seen lighting diyas, candles and flashing mobiles in many buildings, the Prime Minister’s appeal to switch off the lights was not followed in many parts of Dimapur.
In Kohima, Governor of Nagaland, R N Ravi and his family also joined the nation in light lamps while switching off their lights to show “solidarity and confidence in the collective fight” against the Covid-19 at Raj Bhavan.
Modi had on Friday urged people to turn off lights at their homes for nine minutes at 9pm to display the country’s collective resolve and solidarity to defeat the virus.
This is the second time Prime Minister Modi has sought to rally people amid the ongoing lockdown to combat the pandemic, which has claimed more than 65,600 lives globally and inflicted over 12 lakh people.
You may be alone at home but 130 crore people are with you, he had said while making the appeal to fuse a sense of unity and purpose among people during the ongoing lockdown.
The Prime Minister had earlier asked them to clap or beat utensils on March 22 for five minutes at 5pm while observing ‘janta curfew’ from 7 a.m. to 9 p.m. to thank those working in essentials services.
The overall death toll in the country due to the novel coronavirus pandemic rose to 83 and the cases climbed to 3,577 on Sunday after 505 new infections were reported in the past 24 hours, according to the Union Health Ministry.
India has been on a 21-day lockdown from March 25 to check the spread of coronavirus pandemic that has claimed over 65,000 lives globally while more that 12,00,000 declared cases have been registered in 190 countries and territories since the epidemic first emerged in China in December. (PTI/Page News Service)