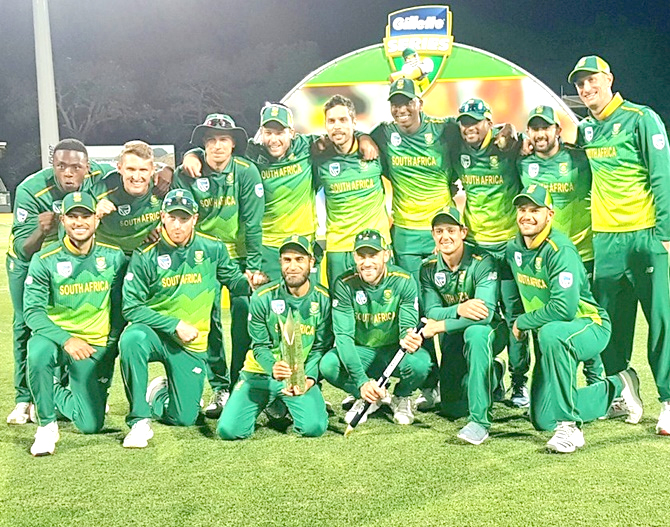 SYDNEY, November 11: David Miller and Faf du Plessis scored sparkling centuries in a partnership of 252 runs as South Africa beat Australia by 40 runs in a one-day international in Hobart on Sunday to win the three-match series 2-1.
The Proteas skipper contributed 125 to South Africa’s 320 for five but it was Miller’s 139 that really caught the eye, a 108-ball assault on the Australian bowlers that featured 13 fours and four brutal sixes.
Dale Steyn kept up the momentum by dismissing Chris Lynn with the first ball of the Australia innings, and his fellow pacemen Kagiso Rabada and Lungi Ngidi soon sent Aaron Finch and Travis Head on their way to reduce their hosts to 39/3.
Shaun Marsh (106) steadied the innings in a fourth-wicket stand of 107 with Marcus Stoinis (63) but once he departed four balls after recording his sixth ODI century, home hopes of only a third win in 14 one-dayers this year faded.
Steyn (3-45) returned to remove Alex Carey for 42, leaving Glenn Maxwell (35) as the last recognised batsman, but he was unable to score quickly enough to challenge the South African tally and Australia finished on 280/9. (Agencies)