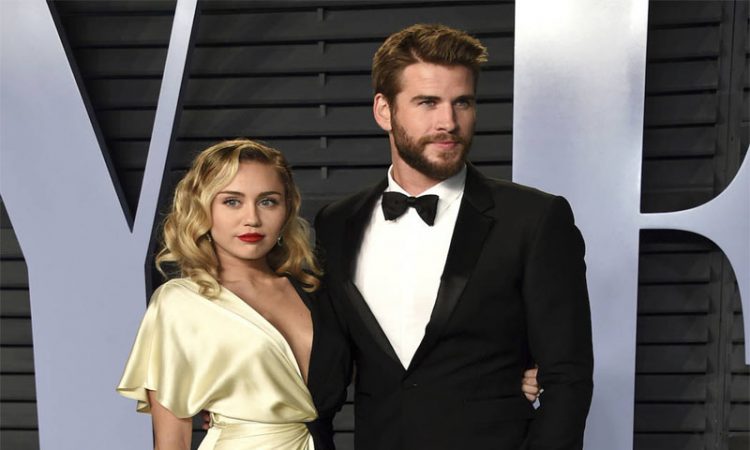 Singer Miley Cyrus and actor Liam Hemsworth have officially confirmed their marriage.
Days after reports of the couple tying the knot surfaced over the weekend, the couple made things internet official on Wednesday.
Cyrus, 26, shared black-and-white images from the intimate ceremony, reported to have been held on Sunday, on social media.
She posted a series of photographs of her with Hemsworth. They first started dating after meeting on the sets of Nicholas Sparks’ 2010 film “The Last Song”.
In one of the pictures, the duo can be seen embracing each other, with a wedding ring visible on the 28-year-old actor’s finger.
In a flash forward-like sequence, an apparent nod to their once on-again off-again relationship, Cyrus shared a photo captioned: “10 years later…”
The couple became engaged in 2012 but broke it off the following year and separated. They reconnected in 2015 and announced their engagement later.
Hemsworth also took to Twitter where he shared one of the images from the nuptials, that reportedly took place at their home in Franklin, Tennesse.
He captioned the photo: “My love,” with a heart emoji.
Sparks also congratulated the couple.
“This makes me so happy. Congratulations @MileyCyrus and @LiamHemsworth. #TheLastSong,” he tweeted.
Musician Mark Ronson, with whom Cyrus collaborated on a version of John Lennon and Yoko Ono’s “Happy Christmas (War is Over)” recently, also wished the couple with a video of “Here comes the bride”.
“Special here comes the bride cyrus/hemsworth remix for 2019. Congratulations you two xo @MileyCyrus @LiamHemsworth,” Ronson tweeted.
Over the weekend, several pictures of the two were shared by their surfer friend Conrad Jack Carr on his Instagram Story where in one of the photographs Hemsworth and his brothers Chris and Luke were seen doing a “shotski”, with ‘Mr and Mrs’ balloons in the background.
Another picture had the couple dressed in traditional white and a tux, respectively in front of a white cake and cupcakes, with the singer’s mother, Tish in the frame.
The singer’s sisters Noah and Brandi were also in attendance at the party.
Until recently the couple lived in their Malibu home, which burned down in one of the three wildfires that blazed through California.