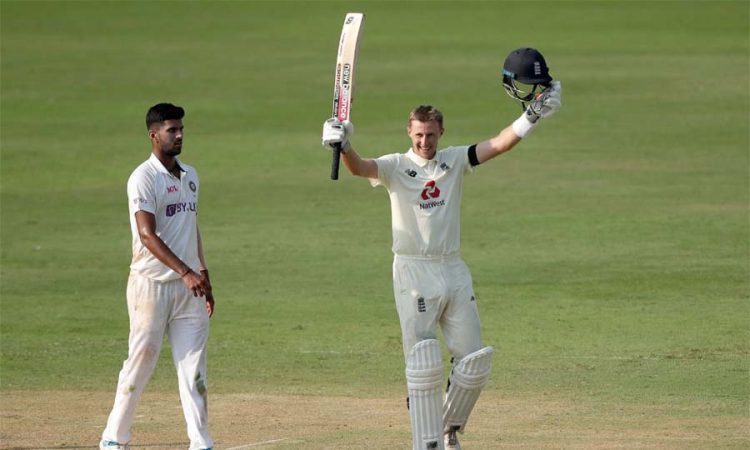 Chennai, February 5: Skipper Joe Root won the battle of attrition against Indian spinners with a classy century in his 100th Test as England reached a comfortable 263 for three at stumps on the opening day of the first match here on Friday.

A modern-day great, Root (128 batting, 197 balls) showed his mastery over slow bowlers during his 20th hundred and third in as many Tests, becoming the ninth player in the history of the game to score a ton on his 100th appearance.
He also admirably guided young opener Dom Sibley (87 off 286 balls), who showed commendable game awareness and enormous doggedness during their 200-run partnership for the third wicket before Jasprit Bumrah (2/40) got him in the final over of the day.
Root’s innings was an exhibition of how to construct an innings on a low, slow track while countering a hostile post-lunch spell from Ishant Sharma (15-3-27-0) where he got the ball to reverse swing.
Root’s speciality, the sweep shot, was also brought out of the closet once Indian spinners started altering the length.
There were full-blooded slog sweep in front of the square, conventional sweep towards square, the paddle sweep behind the square and also switch-hit sweep where he changed the grip against Shahbaz Nadeem.
And towards the end, first six of the match, was also a slog sweep off Ashwin. This was after he had almost lost five litres of fluid in sapping Chennai heat.
Root and Sibley knew that they had to tire Ishant, Ravichandran Ashwin (1/56) and Bumrah out as Virat Kohli at some point would have to pay the price for Washington Sundar and Nadeem’s relative inexperience.
With no purchase from the track, it became easier for Root and Sibley to use their feet and big stride to dominate the two spinners, who looked clueless.
Unlike a lot of batsmen, who in a pre-meditated fashion, come down the track, Root and Sibley waited for the Indian spinners to toss up the ball before they took the plunge.
An on-drive off Ashwin and a pull shot when he dropped one short along with a late cut off Nadeem were for the keeps. There were 14 boundaries in all and each one aesthetically brilliant.
Nadeem and Sundar for most part couldn’t hit the right length and the abrasive surface of the track meant that the Red SG Test ball, which as per media reports was supposed to retain its hardness and seam for a longer duration, got soft and scuffed up by the 40th over.
The softness meant that both England batsmen got extra time to adjust their footwork against both spin and pace.
Save the two dismissals in the first session, England controlled the game during the next two sessions on a lifeless track, which will certainly become difficult for batting as the game progresses.
With India slated to bat fourth in the game, the first innings score by both teams will go a long way in deciding the course of this game.
The Chepauk track with its red clay soil content usually offers good bounce on the first day which becomes variable as the cracks start opening and spinners coming into the play.
But this was one such track, which was devoid of any pace and the edges were not even carrying half the distance to first slip or keeper Rishabh Pant. Such was India’s plight that Rohit Sharma got his helmet and came up half way to Ishant’s deliveries which weren’t medium pace by any means.
Ashwin was brought into the attack as early as seventh over but Sibley and Rory Burns during the first 90 minutes were solid, putting on 63 runs for the opening stand.
Sibley in particular would shuffle towards off-stump to cover the line of the deliveries while waiting for the loose ones. Burns was ready to tuck anything on his pads as there was no juice in the track to assist the new ball bowlers.

It was a moment’s indiscretion on the part of Burns that brought about his downfall. Burns tried a non-existent reverse sweep which lobbed off his gloves for Pant to complete the formalities after having dropped him down the leg-side.
As Sachin Tendulkar had predicted, there was reverse swing on offer as early as first session with Bumrah getting the shiny side to dart in, trapping Dan Lawrence (0) plumb.
But things turned for worse during the next two sessions as Indian bowlers with three spinners in their line-up bowled as many as 11 no-balls. (PTI)

IPL 2021 Schedule: Mumbai Indians to face off against Chennai Super Kings on September 19