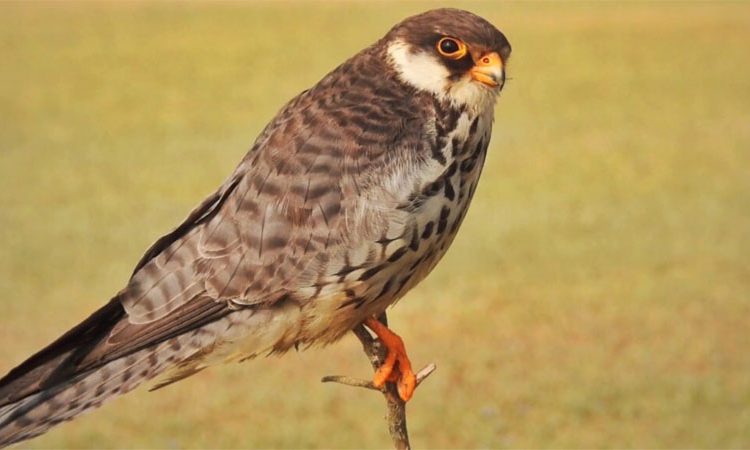 Imphal November 10: Four days after it was released by scientists, a migratory Amur falcon named ‘Manipur’ was hunted down Friday by miscreants at Kebuching, which lies between the districts of Tamenglong and Noney, in Manipur. The Amur falcon, tagged with a satellite transmitter, was one of the two released on November 5 by a group of scientists working on the conservation project of the winged guests. The scientists are trying to understand the movement of the birds during their migratory stop-over in Tamenglong.
Terming the incident ‘very unfortunate’, Forest Minister of Manipur Thounaojam Shyamkumar, said that the department will not spare those involved in the incident. He informed that the satellite instrument was handed over to the Forest Department in Noney. Stating that stricter rules and intense awareness campaigns are needed at this moment, he said the cancellation of gun licenses (air guns) will be discussed in the Cabinet meeting soon.
The minister appealed to the people of the state and other departments to come forward to help save the migratory bird Amur falcon and also the local wildlife, which is important for the existence of the whole eco-system.
On November 4, a team of officials led by Dr Suresh Kumar of Wildlife Institute of India, Forest Department Tamenglong including DFO Arun RS and Peter, Raptor Biologists from Hungary captured five Amur falcons using canopy mist-nets at a community forests area of Chiuluan village along the Barak river in Tamenglong district.
Following an assessment of the body and feather condition, two fittest birds out of five were attached with GPS satellite tags and released in the morning of November 5. The male bird was named ‘Manipur’ while the female was named as ‘Tamenglong’.
The satellite tagging of the two Amur falcons were informed to the villagers of Tamenglong on the day of the ‘4th Amur Falcon Festival’ held at the district. On November 8, Tamenglong District Administration had also issued an order strictly prohibiting the use of air guns along Irang river near Gwangram, Puching, Rangkhung and Taobam villages.
However, despite the efforts, ‘Manipur’ (the male falcon) was killed by miscreants on November 9 and the transmitter was handed over to the department, said Dr Suresh Kumarm, Senior Scientist at Wildlife Institute of India, Dehradun.
DFO of Tamenglong, Arun RS said a team of Forest Department have rushed to the Irang river area as the surviving female bird ‘Tamenglong’ has been tracked in the nearby location where ‘Manipur’ was killed. This has also been done to ensure that more awareness can spread to the villagers. He said Forest Department, District Administration, Police Department, other departments as well as local leaders are collaborating to monitor and protect the Amur Falcons at all the roost sites.
Dr Suresh Kumar further said that each satellite equipment cost Rs 1.5 lakh and an additional Rs 1 lakh to retrieve the satellite data of the bird’s journey.
Amur falcons, weighing 160 grams on an average, are long-distance migratory birds and arrive in northeast India mainly in Manipur and Nagaland en-route their south-bound migration during October from their breeding grounds in Northern China, Eastern Mongolia and far Eastern Russia to their wintering grounds in South Africa, said Dr Suresh Kumar. He said the one-way journey from their breeding to wintering grounds via India is about 20,000 km and the birds do this twice a year.
He further informed that the Amur falcons spend three to four weeks in many parts of Manipur to build fat reserves by foraging on termites that emerge during this time. As a result, this stop-over site in northeast India becomes extremely crucial to the Amur falcons as they need to make five to six days non-stop flight across Peninsular India and then cross the Arabian Sea to go on to their next stop-over site in Somalia, he added.
Due to the abundant supply of termites and other insects in Manipur and Nagaland, it is now learnt that almost all of the world’s Amur falcons pass through this region, Kumar said. (Courtesy: IE)