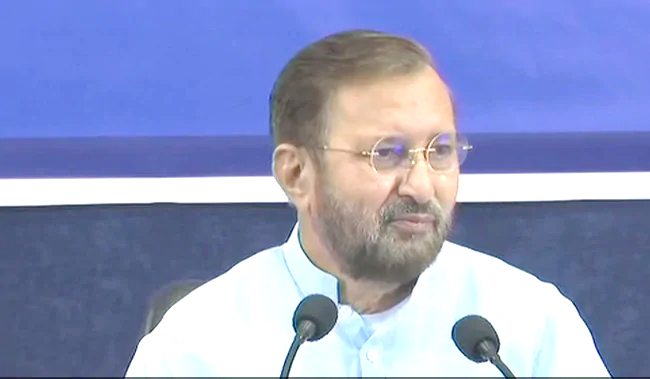 Panaji, October 4: Union minister Prakash Javadekar on Sunday alleged that parties opposing the newly enacted farm laws were acting as “middlemen for middlemen”.
Talking to reporters on the second day of his visit to Goa as part of the ruling BJP’s initiative to create awareness about the farm laws, Prakash Javadekar said the actual situation is that farmers earn less for their products and customers have to buy it at higher rates.
The middlemen hike the prices and the farm laws deal with this problem by eradicating these middlemen, he said.
“Sometimes I feel the opposition parties have become middlemen for middlemen,” he alleged.
Claiming that the agitation against farm laws will die out on its own, the minister said, “Falsehood has limited life while truth lives forever.”
“Congress and NCP launched their campaign to protest against the farm bills. I am going to ask them to look at their manifesto. Former prime minister Manmohan Singh has spoken about such (agricultural) reforms in his speeches. But, the Congress has now done a u-turn,” he said.
He alleged that the opposition parties were spreading a “myth” that APMCs (agriculture produce market committees) will be shut down under the new laws, and the government will stop purchasing the produce or the minimum support price (MSP) would be stopped. “All these are lies,” Prakash Javadekar said.
The BJP leader also said the conduct of the opposition leaders in the Rajya Sabha over the passage of these bills was “condemnable and shameful”.
Referring to a protest by a group of people on his way to Mapusa town on Saturday, Prakash Javadekar said he doubts that those who were protesting were real farmers.
He said 60% population of the country is involved in the farming sector, but their contribution to the GDP (gross domestic product) is 15%.
There is a need to increase productivity and also give them markets outside the country so that their standard of living improves, he said.
Prakash Javadekar said when he was in school, the country’s population was 30 crore, which has now increased to 138 crores, but despite that, theres no shortage of food.
“We are thankful to farmers who have been feeding our country,” he said, adding that it is the responsibility of the government to increase their income.
The Farmers’ Produce Trade and Commerce (Promotion and Facilitation) Bill, 2020, The Farmers (Empowerment and Protection) Agreement of Price Assurance and Farm Services Bill, 2020, and The Essential Commodities (Amendment) Bill 2020 became law after getting the presidential assent recently.
Prakash Javadekar refused to comment on the issue of diversion of the Mahadayi river water, considered as the lifeline of Goa, by neighbouring Karnataka.
Goa and Karnataka are locked in a dispute oversharing of the Mahadayi river water.
Goa has been strongly opposing the Kalasa Banduri project proposed to be built by Karnataka on the river, which is aimed at providing drinking water to three north Karnataka districts by diverting the Mahadayi water into the Malaprabha river.
Asked about the Centre’s silence over the issue, Prakash Javadekar said, “The matter is before the court and I will not comment in it. There is nothing that is pending with us because nothing comes to us. CM will answer questions on it.”
The Supreme Court in an interim order in February this year allowed the plea of the Karnataka government for implementation of the final award by a tribunal for sharing of water between Goa, Karnataka and Maharashtra from the Mahadayi river.
It also said the interim order is subject to the final outcome of the petitions filed by the three states against the tribunal’s award.
PromotedListen to the latest songs, only on JioSaavn.com
The Mahadayi Water Disputes Tribunal passed an order in 2018, allocating 13.42 TMC water (including 3.9 TMC for diversion into the depleted Malaprabha river basin) from the Mahadayi river basin to Karnataka.
Maharashtra was allotted 1.33 TMC water while Goa was given 24 TMC in the final decision of the tribunal. (PTI)