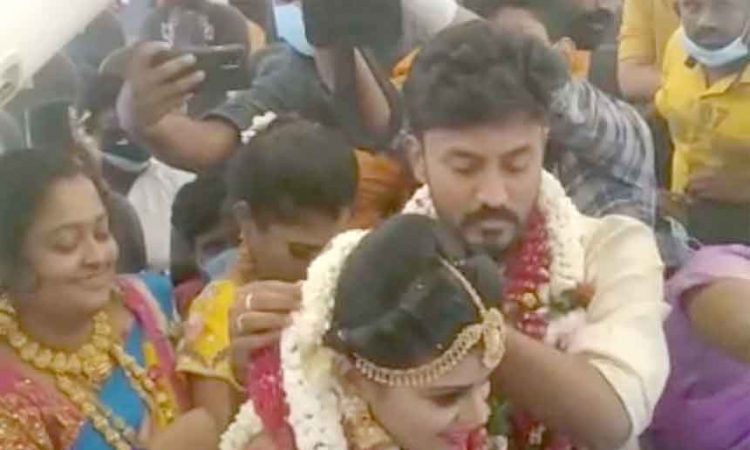 New Delhi/Madurai, May 24: The DGCA has off-rostered the crew of a SpiceJet flight in which a mid-air wedding took place in Madurai in Tamil Nadu amid many guests and relatives in alleged violation of COVID-19 norms on Sunday, with the district administration launching a probe into the matter.

The chartered flight left the Madurai airport and remained airborne for approximately two hours yesterday morning before returning there, sources said on Monday.
A senior official of aviation regulator Directorate General of Civil Aviation (DGCA) said the flight crew has been off-rostered for not enforcing the social distancing norms onboard.
Madurai Collector Dr Aneesh Sekhar said a preliminary enquiry has been initiated into the matter based on the video footage being circulated in the social media.
“Appropriate action would be taken if there was any COVID-19 violation,” Sekhar told PTI.
Meanwhile, the DGCA official said SpiceJet has been directed to lodge a complaint with the relevant authorities against those people who did not follow the COVID-19 norms inside the flight.
He also said that the DGCA “will take strict action” after it completes its probe into this matter.
Images and videos of the mid-air wedding were circulated on social media on Monday, purportedly showing people standing extremely close to each other as the couple tied the knot.
Responding to the matter, an airline spokesperson said, “A SpiceJet Boeing 737 was chartered by a travel agent in Madurai on May 23, 2021 for a group of passengers for a joy ride post their wedding.”
“The client was clearly briefed on Covid guidelines to be followed and denied permission for any activity to be performed on board. The approval for this flight was taken as a joy ride for the wedding group,” he said.
The spokesperson added the agent and guest passengers were briefed in detail, both in writing as well as verbally, on social distancing and safety norms to be followed according to the Covid guidelines, both at the airport and onboard the aircraft throughout the journey.
“The group was repeatedly briefed on the safety norms to be followed by the operating cabin crew and advised to follow the protocols laid down by the DGCA, including restrictions on photography and videography.”
“Despite repeated requests and reminders, the passengers did not follow the guidelines and the airline is taking appropriate action as per rules,” he said.

Meanwhile, the Madurai Collector also warned of action if any violations were found.
“At present we are sourcing evidence to ascertain if violations had occurred. Appropriate action would be taken depending upon the confirmation,” Sekhar said.
Asked if there was any specific complaint of violation, he said the administration was acting based on the marriage video.
India has been badly hit by the second wave of the coronavirus pandemic during the last few weeks. (PTI)