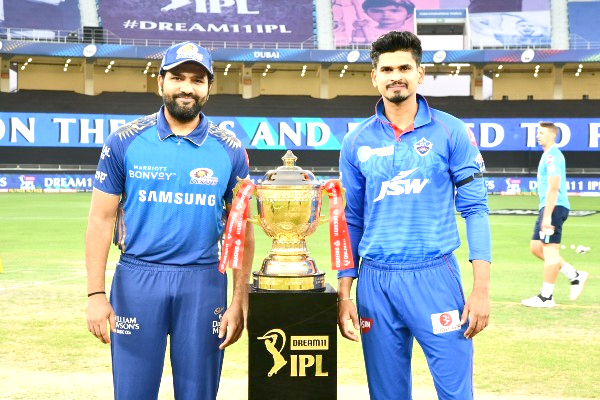 DUBAI, November 9: The unmatched legacy of Mumbai Indians will be thoroughly challenged by the young Mumbaikar Shreyas Iyer, who will lead a passionate but unpredictable Delhi Capitals in a cracker of an Indian Premier League final here on Tuesday.
After 52 days of the most closely-contested and widely-watched IPL played on foreign land in the backdrop of the raging Covid-19 pandemic, the BCCI can pat itself on the back for pulling off a near flawless tournament that gave people a chance to shift from prime-time negativity that dominated air space.
And now, it’s the coronation time with IPL’s most successful skipper Rohit Sharma itching to win his fifth title amid a stormy couple of weeks.
On the other hand, Delhi, a team that had flattered to deceive for a dozen editions, will finally realise its potential on the grand stage of T20 cricket.
There haven’t been too many editions where the two most deserving teams squared off in a summit clash, unlike this edition where Mumbai reached the finals winning 10 out of their 15 games while Capitals, despite a slump, managed to triumph in nine out of their 16 games.
There haven’t been too many teams that have shown the flair and balance of Mumbai Indians, an envy for any opposition.
Sample this staggering piece of statistic and one can gauge the might of MI. In all, their players have hit 130 sixes compared to DC’s 84.
Quinton de Kock’s panache has a foil in Rohit’s style, although proving a point to all and sundry about his hamstring injury would also be on the Indian’s mind.
Suryakumar Yadav’s epic “I am there” gesture after a league game against RCB is now part of the MI folklore, and his elegant way of handling fast bowlers has only exponentially increased his fan-base.
Ishan Kishan, in his five-and-a-half-feet frame, has managed to hit an astounding 29 sixes while Kieron Pollard is a T20 legend with 190 plus strike rate.
If Kagiso Rabada (29 wickets) and Anrich Nortje (20 wickets) get rid of this lot, DC will have to deal with the Pandya brothers — the cool Krunal and the flamboyant Hardik — both of whom are imposing and capable of striking muscular hits.
Shikhar Dhawan (603 runs), who has enjoyed his best IPL, will have to do something out of the ordinary to tackle the yorkers from Jasprit Bumrah and those vicious in-coming deliveries from Trent Boult, which will tail in at the last moment.
In the three contests this season, Mumbai Indians have blown away Capitals in one-sided affairs, but all will come to a naught if Iyer can ensure that his team are fourth time lucky.
The second qualifier showed that they have somewhat found their ideal combination with Marcus Stoinis’s all-round game (352 runs and 12 wickets) and ability to open the innings bringing in the required balance.
Shimron Hetmyer’s six-hitting prowess will also be required, considering that Iyer and Rishabh Pant haven’t exactly fired for the better part of the tournament.
Another big factor for the Capitals could be Ravichandran Ashwin’s quality as an operator in the powerplay.
A crafty Ashwin can always alter the length and check how much of an impact his bowling would have on Rohit’s hamstring if he tries to dance down the track.
The sub-plots and little battles within are going to be enticing.
These include a young captain in Iyer trying to show his wares, Ricky Ponting stamping his credentials as an astute tactician and Suryakumar ensuring that the national selectors are sent another message.
IPL final will grab all eyeballs but possibly miss that man from Jharkhand who has been a regular feature in the finals since 2017.
Mahendra Singh Dhoni will be missed in an IPL final but then cricket, just like life, will go on at its own pace. (PTI)
Mumbai Indians: Rohit Sharma (captain), Aditya Tare, Anmolpreet Singh, Anukul Roy, Chris Lynn, Dhawal Kulkarni, Digvijay Deshmukh, Hardik Pandya, Ishan Kishan, James Pattison, Jasprit Bumrah, Jayant Yadav, Kieron Pollard, Krunal Pandya, Mitchell McClenaghan, Mohsin Khan, Nathan Coulter-Nile, Prince Balwant Rai, Quinton De Kock, Rahul Chahar, Saurabh Tiwary, Sherfane Rutherford, Suryakumar Yadav, Trent Boult.
Delhi Capitals: Shreyas Iyer (c), Kagiso Rabada, Marcus Stoinis, Sandeep Lamichhane, Ishant Sharma, Ajinkya Rahane, Ravichandran Ashwin, Shikhar Dhawan, Shimron Hetmyer, Alex Carey, Mohit Sharma, Prithvi Shaw, Lalit Yadav, Avesh Khan, Axar Patel, Tushar Deshpande, Rishabh Pant, Harshal Patel, Keemo Paul, Amit Mishra, Anrich Nortje, Daniel Sams.