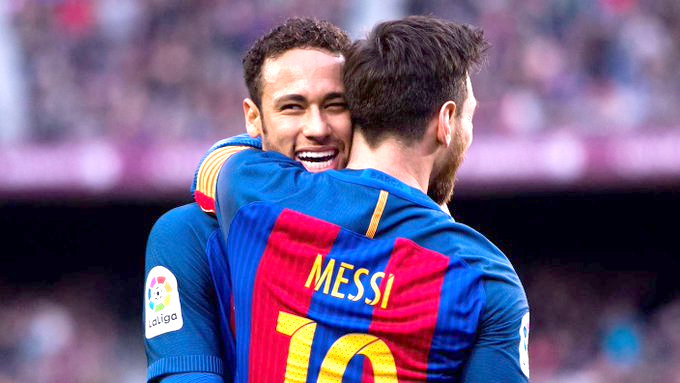 BARCELONA, September 12: Lionel Messi says he wanted Neymar to return to Barcelona this year as the Brazilian would have helped the club take a leap forward,
adding that his former teammate was looking forward to rejoining the La Liga champions.
Barca spent the bulk of the close season negotiating with Paris St Germain to bring Neymar back to the Camp Nou two years after he left for a world record 222 million euros ($245 million) but the Catalans failed to strike a deal with the Ligue 1 champions.
“The truth is I would have loved him to come back to us,” Barca captain Messi told Spanish newspaper Sport on Thursday.
“I understand some people were against it and that’s normal considering everything that happened and how he left us, but thinking about it on a sporting level, for me Neymar is one of the best players in the world.
“Obviously he would have increased our chances of getting the results that we all want. The club would have taken a leap forward, in terms of sponsors, our image, our growth, but in the end it didn’t happen.”
Barca president Josep Maria Bartomeu said last week that the club did everything possible to sign Neymar, but admitted they could not meet PSG’s asking price for the forward, who hit 105 goals in four seasons for the Catalans.
“I don’t know what happened with the directors, I know they were speaking with Neymar, he told me how things were going. He was really looking forward to coming back,” Messi, who has been unable to play this season due to a calf injury, said.
“I understand it’s difficult to negotiate with PSG and with Neymar because he’s one of the best. These negotiations are never easy.”
Barca’s all-time top scorer also said he had no plans to quit the Catalans any time soon after it was confirmed by the club that his contract contains a clause that allows him to decide at the end of each season whether he wants to leave for free.
“I can say that I want to be at Barcelona for as long as I can and end my career here because this is my home,” he said.
“I want to stay here if I can stay in good shape, play well, feel important and if I see we have a winning project.”
Modric thigh problem adds to Real Madrid injury crisis
Real Madrid midfielder Luka Modric is the latest player to fall to the club’s recent injury curse after sustaining a thigh problem, which is set to rule him out of the club’s Champions League opener away to Paris St Germain next week.
The 2018 Ballon d’Or winner did not train with Real on Thursday after returning from international duty with Croatia and the club released a brief statement saying he had injured his right thigh, without stating how long he would be out.
Modric’s injury takes Madrid’s list of injured players up to eight ahead of Saturday’s game at home to Levante, while Gareth Bale is also suspended after getting sent off in last week’s 2-2 draw at Villarreal.
Marquee signing Eden Hazard is still yet to make his competitive debut since his 100-million-euro ($110 million) move from Chelsea due to injury while James Rodriguez, Isco, Brahim Diaz, Rodrygo, Luka Jovic and Marco Asensio are also still unavailable. (Agencies)