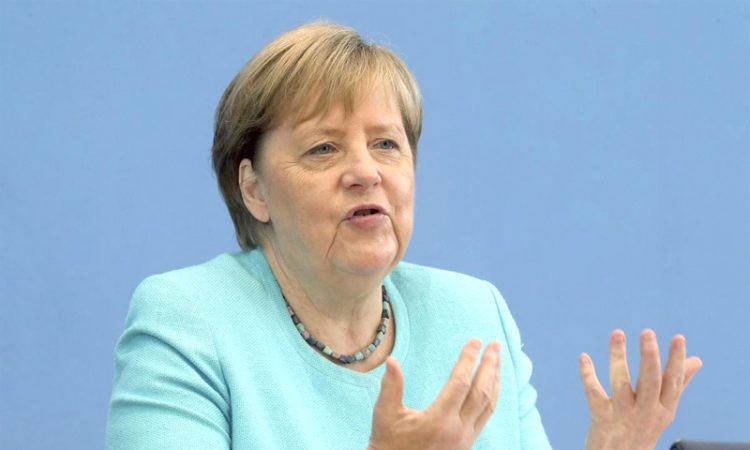 German Chancellor Angela Merkel, gestures, as she holds her annual summer news conference in Berlin, Germany, Thursday July 22, 2021. Merkel said Thursday that new coronavirus infections in Germany are once again rising at worrying speed appealed to her compatriots to get vaccinated and persuade others to do so.

Berlin, July 22: Chancellor Angela Merkel said Thursday that new coronavirus infections in Germany are once again rising at a worrying pace. She appealed to reluctant citizens to get vaccinated and urged compatriots more enthusiastic about the jabs to help persuade others.

Germany’s infection rate remains very low compared with some other European countries. But it has been rising steadily since it bottomed out at 4.9 new weekly cases per 100,000 residents on July 6.
The rise is being fueled by the more contagious delta variant, which is now dominant. On Thursday, the infection rate stood at 12.2.
The figures are rising with “worrying momentum,” Merkel told reporters in Berlin. “We have exponential growth.”
She appealed to Germans to stick to distancing and mask-wearing rules, but said that “we all know the key to overcoming the pandemic, the only way, is vaccination.”
That, she said, would allow the country to deal with higher case numbers in the “looming fourth wave” of infections without overloading the health system.
Slightly over 60 per cent of the German population had received a first dose of vaccine by Thursday, while 48 per cent were fully vaccinated. But the pace of vaccination has slowed in recent weeks even as new cases rise.
“We all want our normality back,” Merkel said. “But we won’t get this normality back alone — only as a community. And for this, we need significantly more vaccine protection.”
Every shot is “one small step” toward bringing life back to normal for everyone and contributes to protecting loved ones, she said, adding: “My request to all those who are already convinced of vaccination is, please try to help convince others.”
The German government and many of its counterparts in the 27-nation European Union faced sharp criticism in the first months of this year when the EU’s vaccination drive got off to a slower start than those in the U.K., the United States and Israel. It has since made up much of the difference.
But Merkel made clear Thursday that she considers the European approach vindicated, saying that it was “absolutely right” to order vaccines via the EU rather than Germany going ahead alone, and to allow significant European vaccine exports to the rest of the world.

“That distinguishes us and we can be proud of it,” she said. “And if we see that, because of that, we are perhaps one or two months later than many other countries that gave away nothing at all, then I think this was all very good.”
“Now we are at a point where we have to plead for people to get vaccinated so that we can really overcome the pandemic,” she said. (PTI)