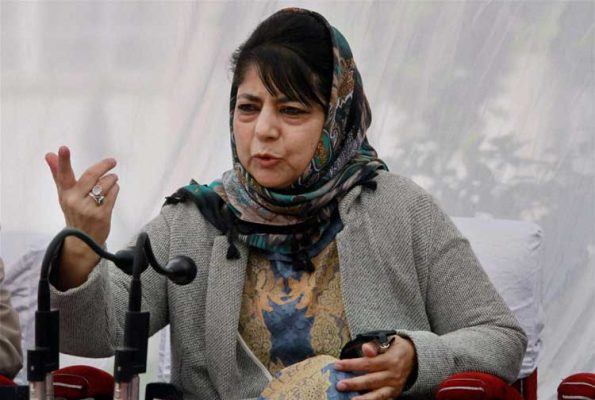 SRINAGAR, May 4: People’s Democratic Party (PDP) president and J&K’s former chief minister Mehbooba Mufti on Saturday appealed to the Government of India (GoI) and terrorists to observe ceasefire in the upcoming holy month of Ramzan to allow people to worship in peace.
“People pray day and night, and go to mosques (throughout the holy month). I would like to appeal to both the Government of India and the terrorists to hold back during this period. Just like there was a ceasefire during Ramzan last year, crackdowns and search operations should be stopped, so that people of J&K spend at least this one month in relief,” she said.
While the Centre will be taking a call on Mehbooba’s ceasefire request soon, sources in central security establishments said it was not likely to be accepted given the security situation in J&K.
Mehbooba blamed the Centre for making the lives of Kashmiris hell. She said if Prime Minister Narendra Modi’s claim of following the policy of ‘Insaniyat, Kashmiriyat and Jamhooriyat’ vis-à-vis Kashmir was true, then he must stop all counter-militancy operations, arrests and harassment of people. That would be the biggest proof of ‘Insaniyat and Jamhooriyat’, she added.
Addressing a press conference here, Mehbooba said: “The Government of India has turned Kashmir into a war zone. They are at war with their own people. See the ban on Jamaat-e-Islami and JKLF, and complete suspension of cross-LoC trade along Srinagar-Muzafarabad road.”
Citing a newspaper report, the former CM said the Government of India has again started intervening in the affairs of Jammu and Kashmir Bank regarding the posts of MD and chairman. (TNN)