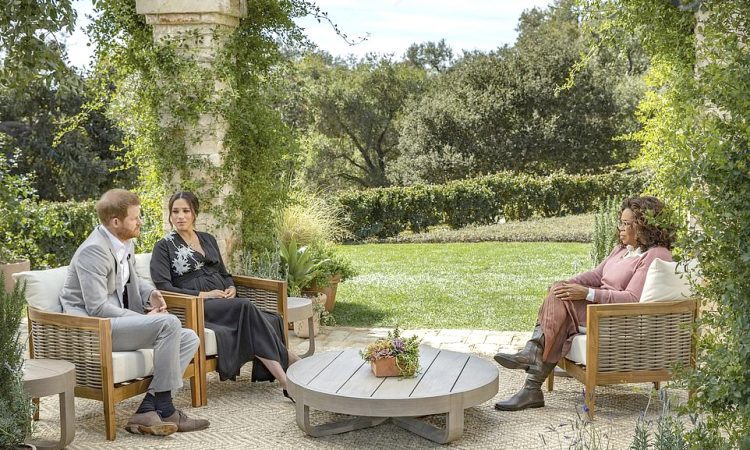 Los Angeles/London, March 8: Meghan Markle struggled as a new member of Britain’s royal family after her marriage to Prince Harry to such a degree that she even contemplated suicide, the Duchess of Sussex revealed in an explosive tell-all interview with American chat show host Oprah Winfry.

The two-hour special, aired on the CBS network in the US on Sunday and set to be aired on ITV in the UK on Monday night, saw Prince Harry joining his wife half-way through as the couple also spoke about concerns of racism within the royal ranks after being asked about their son Archie’s expected skin colour when mixed-race Meghan was pregnant with their first child.
I just didn’t want to be alive anymore, Meghan said, adding that when she went to the institution for help she was told it would not be forthcoming as it wouldn’t be good for the institution .
The 39-year-old former American actress, who is pregnant with her second child, revealed that the couple are expecting a baby girl and shared how the palace decided that their first-born, Archie, could not be a prince and would therefore have no security.
She alluded to “concerns and conversations about how dark his skin might be when he’s born”.
Who is having that conversation?” asked a stunned Winfrey.
Meghan replied: “That was relayed to me from Harry, those were conversations the family had with him, and I think it was really hard to be able to see those as compartmentalised conversations.They were saying they didn’t want him to be a prince or a princess and that he wasn’t going to receive security.”
The Duke and Duchess of Sussex’s children do not automatically become princes or princesses because of a rule that has been in place since 1917, unless the Queen steps in.
Both Meghan and Harry refused to divulge who exactly made remarks about their son’s skin tone, with Meghan admitting that if she revealed who was involved in such talks it would be very damaging to them .
That conversation I’m never going to share,” asserted Harry.
The 36-year-old Duke of Sussex, who is still sixth in line to the British throne, also spoke of his hurt at his father Prince Charles not taking his calls after the couple decided to step back as frontline royals last year.
[I had] three conversations with my grandmother [Queen Elizabeth II] and two conversations with my father [Charles], before he stopped taking my calls, he said.
It was, like, I needed to do this for my family. This is not a surprise to anybody. It’s really sad that it’s got to this point. But I’ve got to do something for my own mental health, my wife’s and for Archie’s as well, because I could see where this was headed, he said, in reference to the couple’s decision to relocate.
They have since moved to California after formally stepping down from royal duties in March 2020, and it was announced last month that they would not be returning as working members of the royal family.
Harry said the couple were only able to afford their new life in California because of his mother Diana Princess of Wales.
My family literally cut me off financially. I’ve got what my mum left me. Without that, we never would have been able to do this I think she saw it coming, he said.
Asked by Winfrey how they would respond to accusations that they were money-grabbing because of deals they have signed with Netflix and Spotify since moving to California, Harry replied: First of all this was never the intention. We’re certainly not complaining. Life is great. We’ve got a beautiful house, beautiful family. The dogs are really happy.
From my perspective all I needed was enough money to be able to pay for security, to keep my family safe, he said.
During the interview, the royal family were also accused of failing to protect the Duke and Duchess, with Meghan saying the situation “started to really worsen” after the couple married in May 2018.
“I came to understand that not only was I not being protected but that they were willing to lie to protect other members of the family. But they weren’t willing to tell the truth to protect me and my husband,” she said.
She referenced tabloid rumours that she had made Catherine, the Duchess of Cambridge, cry during a disagreement about flower girl dresses during her big royal wedding.
But Meghan said the opposite happened and that Kate Middleton later apologised, bringing flowers and a note to make amends.

The programme started with clips from the couple’s wedding, which the Duchess of Sussex described as an “out-of-body experience” and revealed that the couple were actually married by the Archbishop of Canterbury three days before the formal ceremony in a very private ceremony.
Both said that Meghan felt welcomed initially, but things changed later on. She, however, continues to share a very warm relationship with the monarch and most recently phoned her when her husband, Prince Philip the Duke of Edinburgh, was hospitalised for a heart procedure.
I just picked up the phone and I called the Queen, just to check in, said Meghan.
The latest set of revelations are expected to play out in the UK for some time, but Buckingham Palace has not officially commented on it. (PTI)