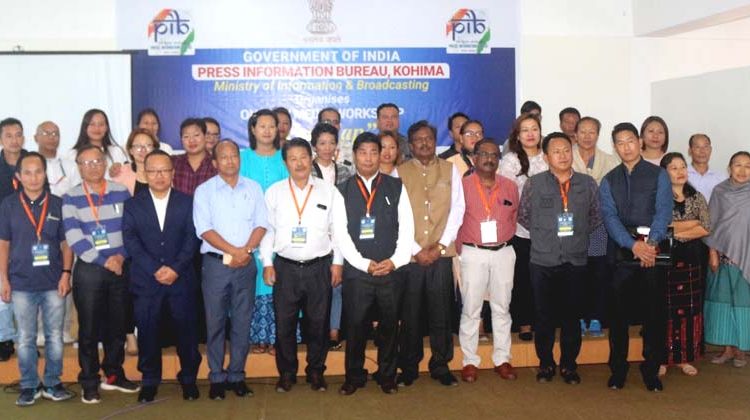 Resource persons, officials of PIB and media persons during the one-day workshop ‘Vartalap’ in Kohima on July 25, 2019.

Kohima, July 25: Media fraternity needs to be actively involved in reporting the success stories of various Centrally Sponsored Schemes in order to maintain a check and balance in its implementation at the grassroots level.
The appeal was made by Nagaland Advisor for Information Technology, Science and Technology and New and Renewable Energy, MLA Mmhonlumo Kikon while speaking at the one day media workshop ‘Vartalap’ organized by Press Information Bureau under Ministry of Information & Broadcasting here Thursday.
He said that ‘Vartalap’ helps in gaining information between the state government departments implementing various CSS programmes in the State and the media persons.
“Reporting of the flagship programmes should be to pass information to the actual beneficiaries and also to maintain check and balance by the implementing agencies,” said Kikon.
Media fraternity should study the different schemes sponsored by the Central government and contextualize it to the local concerns to create better awareness, he said.
They should not only report but follow up with success stories to inspire while also exposing any corrupt practices in order help the government be sensitive and responsible to the needs of the people.
Principal Director of School Education Department, Shanavas C. while expressing that Nagaland and North East is most in the news for negative issues and therefore it should be combined endeavour to project the good sides to the outside world.
In his, he asked the media to play the role of checking mechanism so that the government can deliver better development to the people.
Director of Information and Public Relations, Limwati Ao was of the view that media houses seemed more interested in political and criminal reports than covering the developmental activities, which are meant for the welfare of the people.
Stating that crores of amount is spent on CSS programmes, he urged the media persons to project the success of various schemes which would inspire the implementing agencies to perform better.
During technical session, CSS schemes implemented by Rural Development Department, which include MGNREGS, Pradhan Mantri Awas Yojana-Gramin (PMAY-G), Deendayal Antyodya Yojana (DAY) National Rural Livelihoods Mission, Shyama Prasad Mukherji Rurban – National Rurban Mission and Sansad Adarsh Gram Yojana (SAGY) was highlighted by Thungjamo Odyuo.
Implementation of schemes by Employment, Skill Development and Entrepreneurship Department was presented by its Assistant Director, Zubemo Lotha.
The schemes include Pradhan Mantri Kaushal Vikas Yojana (PMKVY), Craftsmen Training Scheme, Skill Acquisition & knowledge Awareness for Livelihood Promotion (SANKALP) and Skills Strengthening for Industrial Value Enhancement (STRIVE).
73,903 unemployed youths in Nagaland live register
Meanwhile, he informed that a total of 73,903 educated youths have registered themselves in the state Employment Exchange till April 30, 2019.a
The total includes 50,162 male and 23,741 female, he said adding that 6120 are post graduates, 21,976 – graduates, 12,188 – pre-university, 12,414 – matriculate, 18,918 – under matric, 1636 are technical degree holders while 651 are diploma hodlers.
He also informed that through central funding, the department is establishing Model Career Center (MCC) in Kohima while proposal for MCC at Mokokchung and Wokha is under submission.
DoSE spends crores in Pre-Matric Scholarship for ST and Minority
Assistant Director of Directorate of School Education, Nellayappan B. highlighting the six CSS schemes implemented by the department said – a total of 12,553 students are availing Pre-Matric Scholarship for ST Students with an amount of Rs 2,82,44,250.
An amount of Rs 105,29,000 crore is spend for 27,428 students for Pre-Matric Scholarship to Minority students, he said.
He also said that free text books for 1,22,534 students from class I to VIII is being distributed annually at the cost f Rs 3,61,22,450, while free uniform worth Rs 6,96,00,000 is being given to 1,16,021 students of government schools.
He informed that implementing the Mid Day Meal scheme for 2059 government schools and 44 national child projects, the government spends Rs 34,00,00,000 annually.
Nonetheless, he lamented that the Mid Day Meal is not being properly implemented in several government schools due to lack of awareness among the general public.
He also revealed that for CSS Hindi teachers schemes, government spends Rs 68,50,00,000 for 1446 hindi teacher comprising 1379 Under Graduate Hindi teachers and 67 Graduate Hindi Teachers.
Asked on the implementation of Samagra (RMSA & SSA) teachers, he said it is also a CSS programme but is being look after by the School Education Department in Secretariat.
Chaired by News Editor AIR Kohima, Asonuo the programme commenced with welcome song by Song & Drama Division, Ministry of Information & Broadcasting while Deputy Director, PIB Kohima, Abdul Hamid delivered the vote of thanks. (Page News Service)