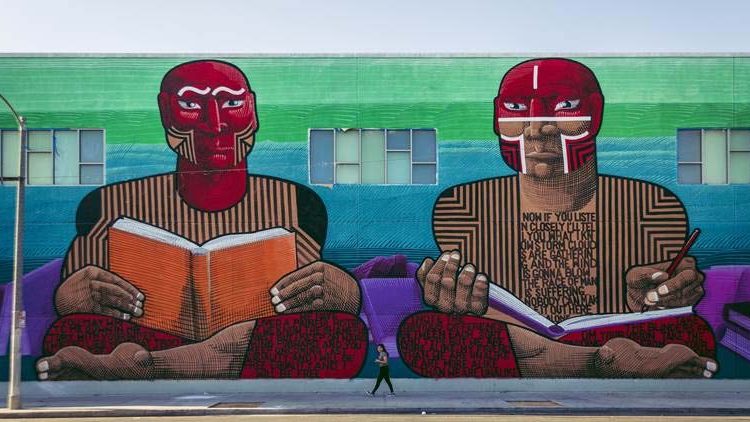 A Shepard Fairey mural of Maya Angelou, mid-laugh in the sunshine, sweeps across an exterior wall of a Los Angeles high school bearing her name.
The exuberant portrait by Fairey, a contemporary street artist, is one of 28 works honouring Angelou that are featured on the school’s grounds as part of a recent public arts project.
“One of her philosophies was that joy is an act of resistance,” Fairey said of Angelou, the poet, artist and activist, who died in 2014. “This idea, that all these hateful, angry things that people just recklessly throw around – if you refuse to let them change your nature, and still find things to celebrate in your life, that’s just part of the battle.”
Fairey was one of 33 local and international artists (some were part of collectives) who offered their interpretations of her for the Maya Angelou Mural Festival, a weeklong soiree in May organised by Branded Arts, which puts together art installations for communities and companies.
More than half of the artists live in Los Angeles, but others came from as far away as Miami, Switzerland and Spain. Some of the pieces are photo-realistic; others are illustrative, geometric or abstract. Many include words or references to her poems.
Shawn Michael Warren, the Chicago-based representational painter, crafted a realistic portrait of Angelou with a focus on her expressive eyes.
“I wanted the mural to feel as lively and organic as possible,” Warren said. “I want each viewer to feel as if her spirit rests within the mural as if she’s staring directly at them, about to utter words of profound wisdom.”
Huge, a mural artist based in Sweden, painted Angelou’s name on a wall with 3D graffiti balloons, accompanied by an orange phoenix – a reference to her poem Still I Rise. “In my opinion, helium balloons often symbolize that you’re celebrating someone or something, so this would be my version of honouring Maya Angelou,” he said.
Branded Arts began its initiative to bring art into public high schools with the RFK Mural Festival, held at the Robert F Kennedy Community Schools in Los Angeles in 2016.
Organisers spent nearly 3 years planning the most recent event, receiving input from school administrators, community members and, most notably, a steering committee of high school students who helped decide the murals’ themes. During the process, the school complex, which was established in 2011, even ended up changing its mascot to a phoenix in honour of Still I Rise.
One of the students made her way into a mural, painted by Victoria Cassinova, a Los Angeles-based contemporary artist.
“The crystals and mountains coming out of her head are visual metaphors for what our mind can create, and the infinite possibilities we can create for ourselves if we put our minds to it,” she said. For his piece, Brazilian street artist Nunca channelled the concept of wisdom, inspired by various tribal cultures. It depicts 2 bodies, painted with Angelou poems, that are seated and reading books.
He said he hoped the artwork inspired people to read more, “to know more about their past and history, and use this information to create their own future.”
Everything came together the week before the festival. Fairey described the environment as warm and collaborative. The artists helped one another with their artwork, and students and teachers brought pupusas and pizza to them while they were working.
The opening week included other types of arts programming, created to introduce students to different parts of the creative economy, including a performance by the musician Miguel. Warren Brand, the founder of Branded Arts, said teachers had even begun to incorporate the styles of art utilized on the campus in lessons at the school.
“We really had a diverse mix of styles and techniques,” he said. “Being able to transform the environment and create an immersive environment for kids can really permeate their thinking as they move forward into these incredibly important years ahead of them.” (Courtesy: New York Times) 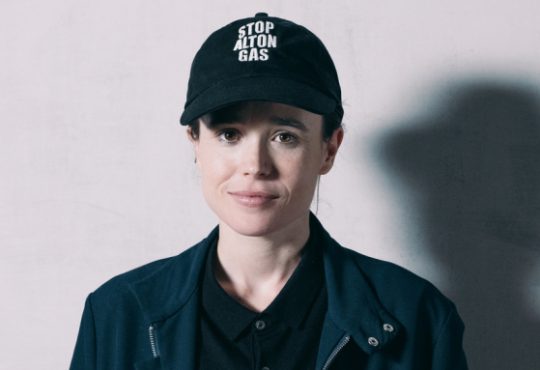