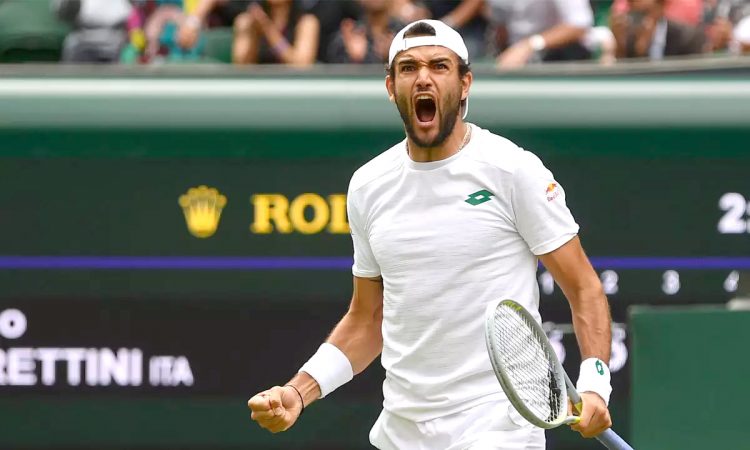 LONDON, July 9: Matteo Berrettini became the first Italian to reach a Wimbledon singles final on Friday with a four-sets victory against Hubert Hurkacz.

Berrettini claimed a 6-3, 6-0, 6-7 (3/7), 6-4 win over his Polish opponent who had knocked out eight-time champion Roger Federer in the quarter-finals.
World number nine Berrettini will face either Novak Djokovic or Denis Shapovalov in Sunday’s final where he will attempt to become Italy’s first men’s Grand Slam champion since Adriano Panatta at the 1976 French Open.
“So far it is the greatest day of my teennis career. Sunday we shall see,” he said.
“I am just proud to have carried the flag here.”
The 25-year-old Italian is one win away from emulating Boris Becker in 1985 in winning the prestigious Queen’s tournament and then Wimbledon a few weeks later.
‘Anything can happen’: Karolina Pliskova in dreamland after reaching Wimbledon final

Czech Karolina Pliskova said she exceeded her own expectations by reaching her maiden Wimbledon final by beating Aryna Sabalenka on Thursday but that anything could happen when she faces world number one Ash Barty on Saturday.
The 29-year-old former top-ranked player battled back from a set down to second seed Sabalanka to win 5-7 6-4 6-4, the first time in 10 years a player has done so in the women’s semi-finals at the All England Club.
It was a battle of the six-feet tall big-hitters as the pair racked up 32 aces between them in a tight contest, smashing a Wimbledon record held by Serena Williams and Victoria Azarenka from 2012 when they hit a combined 25 aces.
In the end, eighth seed Pliskova kept her cool to record her first win over the 23-year-old Belarusian and reach her first Grand Slam final since the 2016 U.S. Open.
“I think I’m still half like I can’t believe it because somehow coming into this tournament the dream was to make the second week, of course, because I was not in the second week for a while,” she told a news conference.
“Never I thought about maybe going into the final. (Coach) Sascha (Bajin) was super confident in me. He said, ‘I told you you were going to make the final’…
“I knew it was going to be like super close because we both serve big, so I knew there were going to be many small chances. Especially after losing the first set, I thought it was going to be super tough to win this match.
“Then to win two sets in a row with the way she was serving today, I think she was serving incredible, all my chances she just put amazing serves in.”
BARTY AWAITS
Standing in Pliskova’s way of achieving a first Grand Slam title is top seed Barty who is aiming to lift the Venus Rosewater Dish for the first time herself.
History favours the Australian who has five wins to Pliskova’s two in their previous meetings.
However, the Czech was calm yet confident that she could spring a surprise and finally show that her potential has not gone unfulfilled.
“So far my second final, second time I’m playing against a player world number one,” she said with a smile, having lost to then top-ranked Angelique Kerber, who was beaten by Barty at Wimbledon on Thursday, in the final at Flushing Meadows in 2016.
“But, no, I think it can’t be any better than that. You want to play the best player in the final. Of course, I don’t want anybody else but her there.
“We’ve had some good matches. Of course, I lost couple of times. But I think she has an extremely difficult game to play (against). It’s going to be difficult on grass because of her slides and just her game overall.
“It’s a final. Anything can happen. Also for her, I know she has a Grand Slam, but also for her it is the first Wimbledon final. I think we both have good chances.

“It’s going to be hopefully a good match to watch as well because with her it’s always interesting.” (AFP/Reuters)