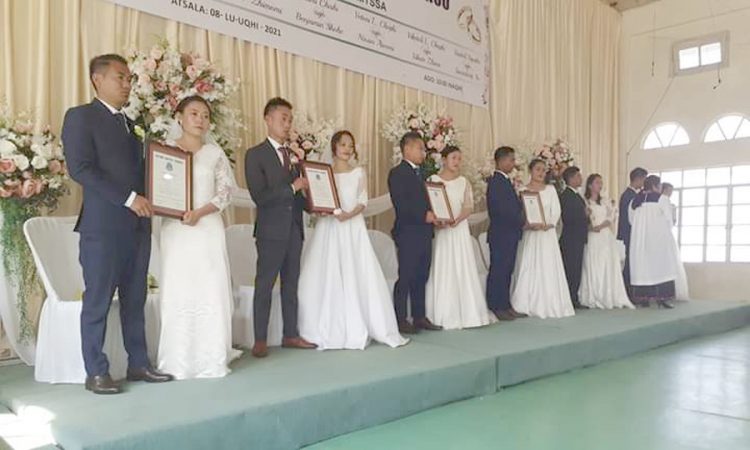 KOHIMA, JANUARY 8: Many believe that marriages are made in Heaven and accomplished on Earth but sometimes weddings become costly events for some people.

In Nagaland, to walk down the aisle has become a costly affair ~ more of a competitive affair in nature ~ and burden on families. Some weddings are for monitory benefit, while others are a status statement. But lately some churches and organizations have mooted the idea of mass weddings, to ease financial burdens and also to give a breathing space to the common people for holy matrimony.
People are gradually accepting the concept of mass weddings in the State in the last couple of years. Mass weddings are being conducted in some places like Phek, Zunheboto, Mokokchung and Dimapur. This would not only lighten the financial burdens but save time during the wedding season from October to March.
Mass marriage ceremonies are also being conducted in other parts of the country for poor and low income people. In some places mass weddings are sponsored by the Government for poor families. In some places, couples share the expenditure for the wedding day.
Rotomi, in Zunheboto district, is a progressive village, which has been conducting mass weddings for the last few years ~ an effort to save the coffers of common people. To continue with this effort, the Baptist Church today organized a mass wedding for 6 couples. The vow-exchanging ceremony was conducted amidst a fully packed church.
Since 2016 Rotomi Baptist Church has been conducting mass weddings.
(Page News Service)