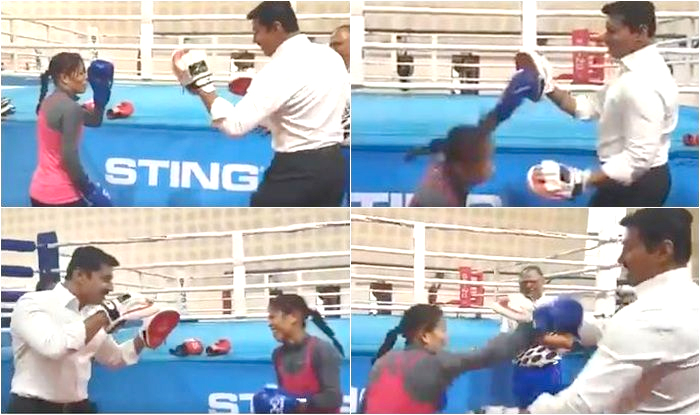 New Delhi, November 1: Five-time world champion M C Mary Kom had an unlikely training partner on Thursday when Sports Minister Rajyavardhan Singh Rathore donned the punching mitts and sparred with her.
The diminutive 35-year-old was seen playfully aiming for the Olympic silver-medallist former shooter outside the ring in a one-minute video she posted after training at the IG Stadium.
The 48-year-old Rathore had a smile on his face as he successfully dodged the attacks launched by the Manipuri, at the end of which the two shared an embrace.
“Today, he came to the national camp and it was great for all of us. All the boxers in the camp felt motivated by his presence at the training. It was a nice gesture by him,” Mary Kom, who is also a Rajya Sabha MP, told PTI about the “fun session”.
While Mary Kom had her gloves on, Rathore wore the punching mitts, padded gloves that are generally donned by trainers to provide boxers with the counter-force while training. The audience included Boxing Federation of India President Ajay Singh among others.
The Olympic bronze-medallist and multiple-time Asian gold-medallist is gearing up for the world championships starting November 15 here. She would be aiming for a historic sixth gold in the 48kg category.
“He is taller than me, so reaching him was a challenge. But I think I did alright,” she laughed.
But who challenged whom?
“It was actually the photographers who came to shoot, they wanted some action. We said ‘ok we will give you action’. He was also enjoying himself and so was I,” Mary Kom said. Mary Kom has enjoyed a stellar year so far, claiming gold medals at the Commonwealth Games, the inaugural India Open and the International Tournament in Poland. (PTI)