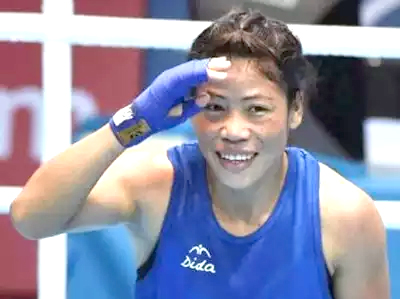 NEW DELHI, November 25: India’s MC Mary Kom, who won a historic sixth world title, was adjudged the best pugilist of the 10th World Women’s Boxing Championships here.
The AIBA panel which chose the Indian as the best among the competitors was a richly deserved honour to the 35-year-old Manipuri, whose endurance, perseverance and the never-say-die attitude is unparallel in history.
Speaking at the official press conference, Mary Kom recalled her participation in the New Delhi event held in 2006.
“At that time, boxers from fewer countries had participated. It was not even included in Olympics. Though we won eight medals, four gold included but competition is much tough nowadays and considering the fact, our results here (one gold, a silver and two bronze medals) were great,” said Mary.
“As for as organization, this one was better than what it was in 2006.”
Asked to compare the win here with earlier gold medals, the Manipuri said it was difficult to remember.
“But this one was very special. I was under pressure and had to change my weight category also. I won my last Worlds gold in 2010 and then the change of weight for Olympics happened. Pressure was something I always felt but don’t know how to put this gold alongside the earlier five,” she reasoned.
However, Mary distinctly remembered that she had won five on the trot. “Even Katie Taylor (of Ireland) had not done that,” she said.
Sonia Chahal claimed the silver medal in 57kg, while Lovlina Borgohain won a bronze in 69kg.
Lovlina pointed out how the New Delhi championships has given the Indian boxers the confidence they needed.
“This Championship gave us the confidence that we too can beat the best and we should fear none. We have beaten many top and world champion boxers in the last few days. But we need to work even hard from here on,” said the young Assamese pugilist.
Simranjit Kaur, who was unlucky to lose in the semi-finals, agreed with her teammates.
“We need to work on strengthening ourselves more and the way we have competed in the Worlds is a good sign for the future of Indian boxing,” said the Punjab girl.
Boxing Federation of India (BFI) president Ajay Singh also said that the world body has given full marks to the organisation and described it as the best championships ever in recent years.
“They were very happy and it gives us the confidence to go ahead and bid for more tournaments. We will be definitely eyeing to get one of the Olympic qualifying events to India,” he said. (PTI)