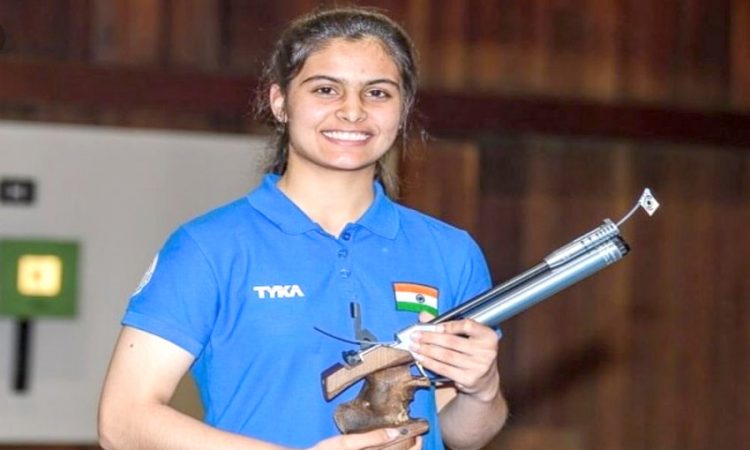 NEW DELHI, July 9: Top Indian medal contender at the Tokyo Games, ace pistol shooter Manu Bhaker on Friday said she has been “working really hard” for the past five years to win an Olympic gold.

Bhaker, 19, recently decided to switch off from social media till the end of Tokyo Olympics to focus on her preparation and performance in the Games, starting July 23.
“To win the Olympic gold medal, I have been working really hard for the past five years now, and it has always been my dream,” Bhaker said in a video posted by the Sports Ministry.
Champion rifle shooter Abhinav Bindra remains India’s lone individual gold medallist at the Olympics.
Winner of innumerable medals at top international events, Bhaker thanked the government for the help it offered her for preparing in the best possible manner.
“The government has been very helpful throughout my shooting years. Whenever we needed any equipments or ammunition for training purpose or pistols or anything, everything is being settled by the government,” the ISSF World Cup medallist said.
Bhaker is currently training in Croatia along with other members of the Olympic-bound Indian team.
The shooters will directly fly to Tokyo before the Games.
In the recently-concluded ISSF World Cup in Osijek, Croatia, Bhaker had teamed up with Saurabh Chaudhary to win the 10m air pistol mixed team gold.
She, however, ended seventh in the 25m pistol event won by another Olympic-bound shooter Rahi Sarnobat.
Bhaker had won a silver in 10m air pistol individual event in the New Delhi World Cup in March and 10m air pistol mixed team gold, along with Chaudhary.
A gold medallist in the prestigious ISSF World Cup Finals, Youth Olympics and Commonwealth Games, the pistol shooter will enter Tokyo as one of India’s biggest medal hopes, having won almost everything one can after a sensational start to her career.
Bhaker has been selected for three events in the Olympics, scheduled to be held from July 23 to August 8.

The Croatia tour was arranged after the National Rifle Association of India (NRAI) realised that it was not possible to hold camps in India amid a deadly second wave of the COVID-19 pandemic. (PTI)