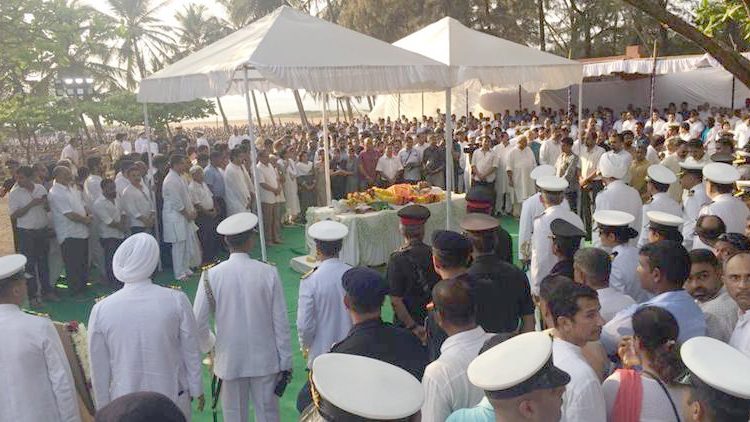 Panaji, March 18: The final rites were performed and mortal remains of Goa Chief Minister and former Defence Minister Manohar Parrikar were consigned to flames at Miramar near here with full military and state honours on Monday evening.
Former Defence Minister was given a 21-gun salute at the last rites.
Parrikar’s elder son Utpal lit the pyre amidst thousands of people who had gathered to catch a final glimpse and bid a final adieu to the departed leader affectionately referred to as “Bhai” across Goa.
The funeral procession of Parrikar began from Kala academy in the city on Monday evening with thousands joining the cortege to bid him a fond farewell.
The mortal remains of the 63-year-old BJP leader and four-time Chief Minister were kept in a flower-decked Army hearse which left the Kala Academy at Panaji for the Miramar beach.
Earlier in the day, when the body wrapped in the tricolour was brought to the city BJP headquarters, hundreds of party workers, leaders and supporters of Parrikar became emotional.
His body was brought from his private residence in Dona Paula to Panaji in the morning from where it was later kept in state at Kala Academy, where hundreds of mourners paid their tributes.
Prime Minister Narendra Modi, Defence Minister Nirmala Sitharaman, Minister for Textiles Smriti Irani, Union Minister of State Ramdas Athawale paid floral tributes to Mr. Parrikar at Kala Academy and consoled his bereaved family members.
BJP National president Amit Shah, Union Shipping Minister Nitin Gadkari, Union Civil Aviation Minister Suresh Prabhu, Union Health Minister J.P. Nadda, some Chief Ministers, including Chief Minister of Maharashtra Devendra Fadanvis and some of his ministerial colleagues were present for the final rites at Miramar.
Parrikar served as Chief Minister of Goa four times but could not complete a single term in office. He served as Defence Minister in the Prime Minister Narendra Modi cabinet from 2014-17. (Agencies)