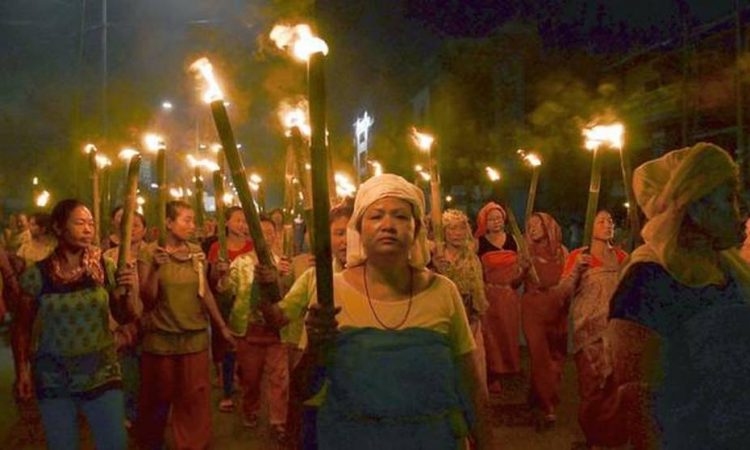 Rallying against violence: Women taking out a protest in Imphal

IMPHAL, OCTOBER 14: For many nights over the past month, Manipur has been witnessing torch light processions in the valley districts, with the mostly women marchers demanding among other things an end to mob violence directed at those accused of crimes.
Over the last few years, at least 3 persons in Manipur, and 2 in neighbouring Nagaland, have been victims of mob lynchings.
The apprehension of local mobs rendering vigilante justice has even forced the police to spirit away a woman and a man from Manipur. The duo, who are accused of killing a Police Inspector in order to steal his vehicle, have been placed in the custody of the police in Nagaland, at an undisclosed location, while they await trial.
Pishakmacha, a middle-aged woman activist said, “We demand an end to mob crime in this State.”
Renubala, a young housewife from Thoubal district who is also participating in the marches said, “A man is not guilty unless a court says so. The Government should prevent such mob trials and the beating to death of people. The family members of the accused persons also end up being banished from the locality forever.”
‘Missing’ wife
Chaoba Laishram’s case is an example of the extent to which mob justice has hurt the lives of common people in Manipur.
In 2010, when he was 25 years old, he married Naobi Konthoujam in Thoubal district. However, after just 8 months she was reported “missing” on April 18, 2011. Accusing Chaoba of murdering Naobi and clandestinely disposing of her body, Naobi’s parents, relatives and other local residents decided to take the law into their own hands. Ignoring Chaoba’s protests of innocence, the mob ransacked and pulled down his tin-roofed house and banished him and his parents from the village, a common form of mob punishment given to those accused of murder in Manipur.
On September 21, 2011, a highly decomposed body of a young girl was found by the Bishnupur district police at Ithai barrage. Kunjarani Konthoujam, the ‘missing’ Naobi’s mother, promptly “identified” the body as that of her daughter.
The angry villagers brought the mortal remains to the ransacked remnant of Chaoba’s house, piled up wood from the demolished structure and cremated the body in the courtyard.
And the following month, a local court remanded Chaoba and his parents to judicial custody.
Police, however, subsequently learned that Naobi’s mother had been frequently visiting a house in Thoubal district’s Tekcham belonging to one Sanayai, who it was discovered had secretly married Naobi. Police also found Kunjarani often providing care for an infant. Interrogation established that the baby was the child of her “missing daughter” Naobi and that from the very beginning Kunjarani knew that her daughter was not missing but had been living in Ukhrul district with her new husband.
Police arrested Naobi, her mother Kunjarani and the new husband and Chaoba was subsequently acquitted by the court.
However, Chaoba’s house had already been destroyed. Importantly, the possible homicide of the unidentified woman who had been cremated was never investigated.
On September 19, Manipur’s Cabinet decided to introduce ‘The Manipur Mob Violence Control and Prohibition Bill, 2018’ in the Assembly. Chief Minister N Biren has said that mob violence will never be tolerated or condoned. He disclosed that 5 persons had been arrested and some policemen suspended in connection with the lynching of Farooque Ahmed Khan, an MBA student, at Tharoijam in Imphal West District on September 13.
While villagers claimed that 3 persons had come in a car to steal 2-wheelers and that 2 people had managed to escape, activists demanding justice for Khan said that had been no car and that the victim had likely gone to the village to meet a friend there.
Jogeshchandra Haobijam, Imphal West District SP said: “Nothing much can be disclosed since the matter is under investigation”.
People recall that on May 3, 1993, a riot had been triggered by a rumour resulting in the loss of 103 innocent lives including those of women and children. The protest marches, according to the participants, are aimed at preventing such rumour-mongering and the recurrence of mob violence.
Shymasakhi, a housewife from Bishnupur district, pointed out that in many instances the police “fails to protect the accused persons.”
‘Contempt of court’
A Romenkumar, a retired IPS officer who is now a High Court lawyer, told The Hindu that mob violence had reached even into court precincts. He referred to increasing incidents of persons accused of rape or murder and other heinous crimes being thrashed in the court premises, acts which he said amounted to contempt of court.
“Adequate security measures should be taken so that the potential trouble makers are not allowed inside the court compound,” he added.
Chief Minister N Biren, who also holds the Home portfolio, had recently said that the State Government had set up a fast track court keeping in mind “the gravity of the issue.” The aim was to ensure that persons accused of rape-cum-murder were convicted within a few months. He cited the case of a tribal youth in Manipur’s Senapati district, who had been convicted in July for raping and murdering a young girl and sentenced to death.(Courtesy: The Hindu)