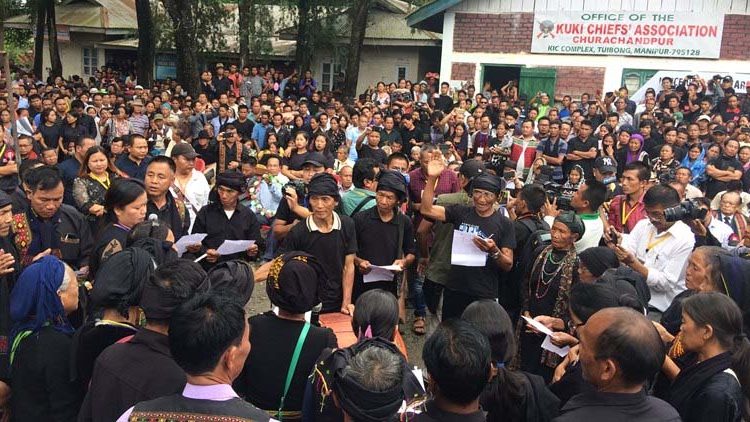 Imphal, September 11: The Kuki National Organisation (KNO), an umbrella group of 17 armed groups of the Kuki tribe, has urged the central government to settle the issue of “Kuki Genocide” perpetrated by the NSCN-IM before striking a deal with the Naga militants. The KNO, which is one of the two umbrella groups under a tripartite ceasefire agreement with the governments, also warned that the outcome of the Indo-Naga peace deal should not affect Kuki territory. “The Central government should settle the issue of the Kuki first or simultaneously and stop giving undue attention to the Naga militant for they are the perpetrators,” said Dr Seilen Haokip, spokesperson of the KNO. Claiming that the Kuki tribe has been marginalized, Haokip said, “the Kukis should be given the opportunity to live with dignity along with its Nagas and Meiteis brothers as the history of the Kukis is intrinsically tied with this land (Manipur).” “Justice should be done for all concerned and not just Naga but the Kukis and Meiteis without which there cannot be peaceful co-existence”, he added. “Although the content of the framework agreement is unknown, it is obvious that it intends to bring a solution to the Naga issues. But, in doing so, the Kuki territory should not be affected,” he warned. On Tuesday three monoliths, inscribed with the names of 1157 persons who were victims of the “Kuki genocide” were erected at Kuki Inpi Churachandpur complex, in Tuibong, Churachandpur district. On September 13, 1993, as many as 115 Kuki villagers including women and children were allegedly killed by the armed cadres of the NSCN-IM in a single day in different places of Tamenglong and the erstwhile Senapati district known as “Joupi Massacre”. Today marks 25 years since the massacre, the tribe has been observing ‘SAHNIT-NI’ (Kuki Black Day) in remembrance of the victims killed during the ethnic clash starting from 1992 to 1997. It is organised for three days starting from September 11. Thousands of Kukis from different parts including from Arunachal Pradesh, Mizoram and Myanmar came together at the complex and paid homage to the victims of the ethnic clash. The ceremony began with a mass prayer in honour of the victims of the ethnic clash which was followed by the traditional gun salute and floral tribute by victims’ families, tribe leaders, elders etc. According to Letzamang Haokip, chairman of the Black Day committee, the ‘genocide’ saw more than 350 villages scorched and more than a thousand innocent Kukis massacred, including many women, children, the aged and the infirm. This led to internal displacement of more than one lakh Kukis of Manipur, he said. “We have been demanding justice for a long time. Even after 25 years of the infamous Joupi massacre, both the Government of India and the Manipur Government have done nothing to rehabilitate the Kukis to their ancestral home. Instead, the Government reasons with culprits of genocide and threatened the very existence of the Kukis as loyal, he lamented. He opined that the Kukis will not remain a silent spectator and take a tough stand if the government continuing to ignore the demand of the Kukis. (Courtesy: IE)