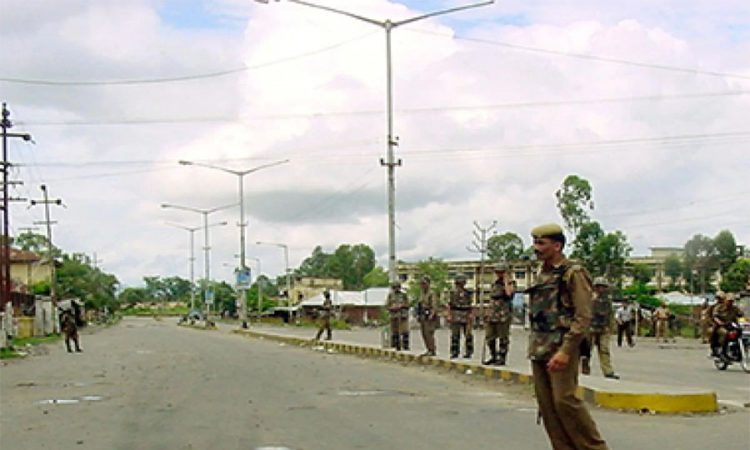 Imphal, May 19: The Manipur government has urged the Union home ministry to shift “unauthorised” NSCN-IM camps to Nagaland, following alleged distribution of relief materials by civil society organisations to cadres of the insurgent group lodged in two such camps, a top official said.
Chief Secretary J Suresh Babu, in a letter to the Ministry of Home Affairs, highlighted the matter after a “large number of civil society organisations…were openly invited to these camps”.
The controversy over the presence of the “unauthorised” camps of the NSCN-IM surfaced recently when members of civil society organisations were seen extending relief materials to the cadres at the Huthrong Brigade Camp in Senapati district and the Ashiho Chaomai Battalion in Chandel district of Manipur on May 8 and May 13 respectively.
Videos of the distribution of relief materials were shared on social media, “causing embarrassment to the state government”, the letter said.
It mentioned that central security forces, which are overseeing these camps, “have also failed to restrain” them from illegal activities.
“The recent developments of frequent visits of civil society organisations to these locations could have been prevented,” the state government asserted in the letter.
It also urged the MHA to take serious note of this and direct the Army and the Assam Rifles to control the activities of the NSCN-IM and also prevent public and civil society organisations from visiting these camps.
“The Ministry of Home Affairs is also requested to direct them to remove the camps from Manipur and relocate in Nagaland,” the letter added.
The Manipur government said the camps existed in the state despite the fact that the “ceasefire agreement does not extend to the state of Manipur”.
The NSCN-IM inked a ceasefire agreement with the central government in 1997, following which the cadres are required to stay in designated camps only.
A framework agreement was signed on August 3, 2015 by the NSCN-IM and the Centre’s interlocutor, R N Ravi, in presence of Prime Minister Narendra Modi.
The framework agreement came after over 80 rounds of negotiations, spanning 18 years, with the first breakthrough made in 1997 when the ceasefire agreement was sealed after decades of insurgency in Nagaland which started soon after India’s independence in 1947.
The central government has already rejected the NSCN-IM’s demand for unification of Naga-inhabited areas — located in Manipur, Arunachal Pradesh and Assam. The three northeastern states also vehemently oppose it.
A group of seven Naga outfits have also joined the peace talks. (PTI)