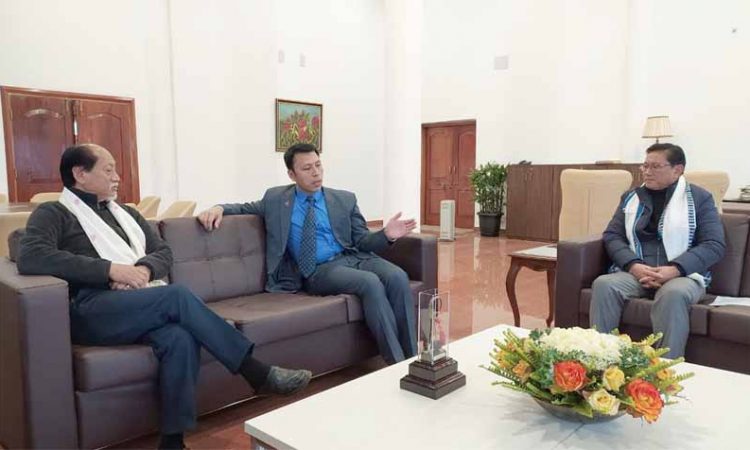 Dimapur, February 9: Manipur Education Minister, Dr Th Radheshyam, accompanied by Kevisa Kense, former president of Old Boys’ Association of Sainik School Imphal (OBASSI) and N Ibungouchoubi, former president of Sainik School Imphal Alumni Association (SSIAA) called on Chief Minister of Nagaland, Neiphiu Rio on February 8 to highlight issues pertaining to Sainik Schools of the country, particularly in the Northeast states.
Dr Radheshyam urged the Chief Minister of Nagaland, who is also an alumnus of Sainik School, to bring all the education ministers of the Northeast states to collectively work out a modality to impress upon the Union Minister of Defence to extend financial assistance to the Sainik schools of the region.
He recalled the 22nd Board of Governors of Sainik Schools meeting recently, which was chaired by the Rajya Raksha Mantri, during which many important issues, including the management of the institutions were highlighted. Being small states with limited resources, the Sainik schools in Assam, Nagaland, Manipur and Mizoram are facing grave difficulties in managing the schools, he highlighted.
While endorsing the genuine problems of all the Sainik schools in the region, Nagaland Chief Minister Neiphiu Rio stressed the need for all the education ministers to come together and work out a modality to make a representation to the Union Minister of Defence to give a one-time grant to develop the infrastructure and own up the responsibilities of Sainik schools.
Education Minister of Nagaland, T Sukhalu, who was also present in the meeting, stated that there are many common issues of education in the region and the collective efforts of all the education ministers will be of great importance in developing educational institutions and research institutes to benefit the younger generation of the region.
“The Union Minister of Defence should be happy to take care of the Sainik schools under its ministry. I will write to all the Chief Ministers of the northeast states to support the initiative taken up by Dr Radheshyam,” Neiphiu Rio said.
(Page News Service)