MANCHESTER, February 11: Sergio Aguero grabbed a hat-trick as Manchester City scored four times inside 25 minutes to thrash Chelsea 6-0 and leapfrog Liverpool again to top spot in the Premier League on goal difference on Sunday.
Aguero should have had even more than three as the Argentine missed a glorious early chance and hit the bar in the second-half in a humiliating afternoon for Maurizio Sarri’s men.
Raheem Sterling started and ended the scoring and Ilkay Gundogan also netted in the first quarter of the game as City ended what could have been a testing week with a trip to Everton in between the visits of Arsenal and Chelsea with maximum points.
Jurgen Klopp’s men maintain the advantage of a game in hand, but handed a reprieve by Liverpool’s draws against Leicester and West Ham in recent weeks, City look determined to become the first side in a decade to retain the Premier League.
Chelsea on the other hand slip to sixth with the scale of the defeat sure to raise further doubts over Sarri’s future.
A 4-0 defeat to Bournemouth in their last away game was Chelsea’s heaviest league defeat since 1996. And this was their worst loss in any competition since 1991 after failing to recover from Sterling’s fourth-minute opener.
Eden Hazard went to sleep from Kevin de Bruyne’s quickly taken free-kick and Bernardo Silva had acres of space to cross for the England international to fire home.
Pep Guardiola had described this match as a “final” for his side given that Chelsea had a week to prepare, while City ground out a 2-0 win at Everton on Wednesday.
Guardiola fell to the floor in exasperation when Aguero somehow side-footed wide with his easiest chance of the game moments later.
But the Catalan coach need not have worried that would prove a costly miss as Aguero made amends in stunning fashion by blasting into the top corner from 25 yards to double City’s after just 13 minutes.
Aguero had a simple task to make it 3-0 six minutes later when he pounced on Ross Barkley’s slack header towards his own goal.
And Gundogan’s shot from the edge of the area then had too much power for the world’s most expensive goalkeeper Kepa Arrizabalaga to compound Chelsea’s woes.
Such was the defensive collapse at the other end, Gonzalo Higuain had little chance to shine but the Argentine striker was unfortunate not to score his third goal in as many league starts for Chelsea when Ederson turned over his dipping volley five minutes before the break.
Azpilicueta says sorry to Chelsea fans after Man City drubbing
Cesar Azpilicueta has apologised to Chelsea fans after their humiliating 6-0 defeat by Manchester City, describing it as one of the lowest points in his professional career.
Maurizio Sarri’s team crashed to their heaviest loss since 1991 as the Premier League champions ran riot at the Etihad Stadium on Sunday.
The heavy defeat saw Chelsea slip below Arsenal to sixth in the table on goals scored and raised further questions over the future of Sarri. (AFP)

No excuses as VAR set for Champions League debut 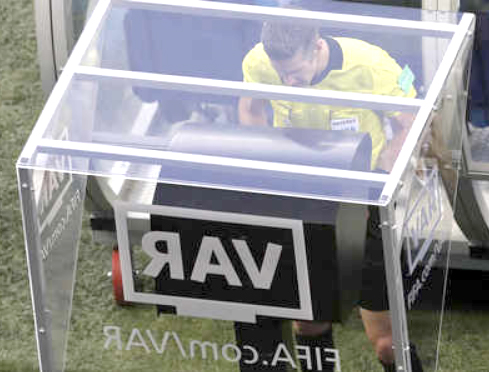 ROME, February 11: UEFA president Aleksander Ceferin has warned that there will be no more excuses as Video Assistant Referees (VAR) make their debut in the Champions League starting this week.
Manchester United host Paris Saint-Germain at Old Trafford on Tuesday while Roma play Porto at the Stadio Olimpico as the last 16, first legs get under way.
The system which was used during last year’s FIFA World Cup, and is now widely called upon in most of Europe’s leading leagues, was initially set to be rolled out in the Champions League from the start of next season.
However, it will now make its debut six months earlier than anticipated.
“If we can do it before, why not” pondered Ceferin of an initiative which had been opposed by his predecessor, Michel Platini.
The decision to bring forward its use follows lobbying from top clubs including Juventus, whose chairman, Andrea Agnelli, is also president of the powerful European Club Association (ECA), a union of the continent’s biggest teams. (AFP)