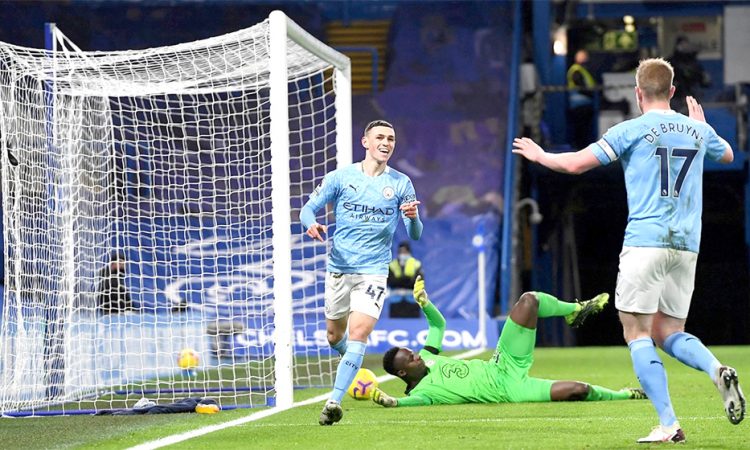 LONDON, January 4: Manchester City shook off the impact of a COVID outbreak in their ranks to outclass Chelsea 3-1 at Stamford Bridge and put themselves firmly in the Premier League title mix on Sunday.
City manager Pep Guardiola had six players unavailable after positive tests but his team responded in scintillating fashion with goals by Ilkay Gundogan, Phil Foden and Kevin De Bruyne dismantling Chelsea in 16 first-half minutes.
After that it felt like damage limitation for a subdued Chelsea side whose season is unravelling alarmingly after a strong start, although substitute Callum Hudson-Odoi did grab a stoppage-time consolation goal.
City’s vintage display lifted them to fifth in the table with 29 points, four behind joint leaders Liverpool and Manchester United having played one game less.
A fourth defeat in six league games leaves Chelsea in eighth place with 26 points having played two games more than City.
Positive COVID tests robbed Guardiola of Kyle Walker, Gabriel Jesus, Ferran Torres and keeper Ederson for the first game of the new year.
There was also the matter of Benjamin Mendy breaking COVID protocols, although he was on the City bench.
Initially City looked vulnerable but when De Bruyne missed a sitter in the 15th minute it sparked them into life and Chelsea were swept aside with ease.
City are unbeaten in seven league games and have conceded only two goals in that run, scoring 14.
“After five or 10 minutes we found our rhythm,” said De Bruyne, who was instrumental in City’s best moments. “After that we played very well and took our chances at the right time.
“We play a bit differently this year but the team is finding the rhythm in the last month.”
Chelsea manager Frank Lampard now faces the task of trying to pull his side out of a nosedive that has silenced all talk of a title challenge.
De Bruyne should have given City the lead when he was played in by a superb pass from Joao Cancelo but the Belgian dragged his shot agonisingly wide of the far post.
Three minutes later though City went ahead as Foden played the ball sideways to Gundogan who produced a silky turn before firing a right-footed shot past Edouard Mendy.
City doubled their lead in the 21st minute when De Bruyne threaded a pass in to Foden who finished clinically.
The wheels really fell of the Chelsea wagon in the 34th minute when De Bruyne headed a ball out and Raheem Sterling had half the length of the pitch at his mercy with Chelsea’s defence desperately trying to reel him in.
Sterling looked to have over-elaborated as he was forced wide but eventually turned to thud a shot against the post with the ball rebounding to De Bruyne who coolly slotted home.
Chelsea enjoyed more possession in the second half with City content to play on the break but they looked a forlorn side and rarely tested City’s American goalie Zack Steffen who was making his Premier League debut in place of Ederson.
The only blot on City’s copybook was the late goal by Hudson-Odoi who turned in a cross from Kai Havertz.
EPL: Leicester City up to third after beating Newcastle United

Leicester climbed to third place in the Premier League as goals from James Maddison and Youri Tielemans sealed a 2-1 win against Newcastle on Sunday.
Brendan Rodgers’ side struck twice in the second half at St James’ Park.
Andy Carroll reduced the deficit with his first goal for Newcastle in over 10 years, but it was too late to rescue a point.
Leicester were good value for their first win in three league games as they extended their unbeaten run to four matches.
The Foxes are one point behind leaders Liverpool, who face Southampton on Monday.
After missing out on a top four finish on the final day of last season, Leicester look well equipped to challenge for Champions League qualification and could even pose a threat to Liverpool’s title defence.
Having taken maximum points from a visit to Newcastle for the fifth successive season, Leicester have now won seven of their nine away league games this term.
They were hardly tested by Newcastle, who are without a win in six games in all competitions as the pressure mounts on Magpies boss Steve Bruce.
Jamie Vardy surprisingly started on the bench for Leicester’s previous match at Crystal Palace, but the Foxes’ leading scorer was restored to the starting line-up along with the fit-again Maddison.
Maddison went close in the opening moments, making a menacing run towards the Newcastle area before firing just wide.
Leicester thought they had taken an early lead when Vardy accelerated onto Maddison’s precise pass, rounded Newcastle keeper Karl Darlow and slotted into the empty net.
Vardy’s joy was short-lived however as an offside flag curtailed his celebrations.
Kasper Schmeichel dashed out of his area to deny Callum Wilson a shooting chance after Joelinton’s pass sent the striker racing clear.
Newcastle once again followed boss Bruce’s defensive game-plan, allowing Leicester to dominate possession.
They should have been in front when Wesley Fofana heading wastefully over from Maddison’s corner.
Unable to apply the knockout blow in the first half, Leicester finally took the lead in the 55th minute.
Harvey Barnes led the break and his pass picked out Vardy, who cut inside before teeing up Maddison’s fierce strike past Darlow.
It was Vardy’s 34th Premier League assist for Leicester, equalling the club record set by Steve Guppy.
Lacking any threat in attack, there was an air of desperation about Newcastle’s rejected penalty appeal following Timothy Castagne’s clean challenge on Wilson.
Tielemans killed off Newcastle in the 72nd minute when the Belgium midfielder met Marc Albrighton’s cross with a fine finish.
Carroll, who started his career with Newcastle before spending eight years away after leaving in 2011, came off the bench to score in the 82nd minute.
His thumping shot after Leicester failed to clear a free-kick was his first goal for his hometown club since December 2010. (Reuters/AFP)