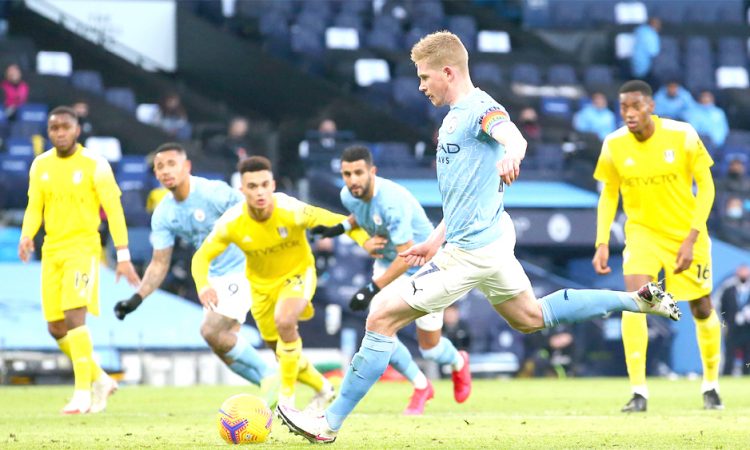 MANCHESTER, December 6: Manchester City climbed into the Premier League top four after first-half goals from Raheem Sterling and Kevin de Bruyne secured a comfortable 2-0 home win over struggling Fulham on Saturday.
It was the first time this season City notched successive league wins as they also stretched their perfect record against Fulham to 10 games in all competitions after a dominant performance at the Etihad stadium.
The result lifted City into fourth place on 18 points from 10 games while Fulham stayed 17th on seven points from 11 matches, just outside the relegation zone.
Only a string of superb saves from Fulham goalkeeper Alphonse Areola denied City a bigger win after Sterling fired the hosts ahead in the fifth minute and De Bruyne converted a 26th-minute penalty.
Having said City were shifting their focus on the title race after securing a Champions League knockout stage berth, their manager Pep Guardiola criticised his players for missing chances against Fulham.
“This season looks like there will be a lot of teams in contention (for the Premier League title),” he told the BBC.
“Everyone can beat everyone. In this month it was important to get qualification for the Champions League, now we focus on the Premier League.
“The finishing was wasteful and we know we have to improve this. In the last 20 minutes we lost too many simple balls, which is a problem.”
Areola kept out a Sterling effort barely a minute before the England forward beat him with a clinical finish from inside the penalty area after he was put through by De Bruyne.
The pair created City’s second goal too as Belgian international De Bruyne sent Areola the wrong way with his spot- kick after Joachim Anderson fouled the irrepressible Sterling.
Areola denied Sterling and De Bruyne several times and the latter also hit the woodwork after a flowing move, with Fulham failing to muster anything meaningful up front in a lop-sided contest.
Fulham manager Scott Parker was happy with his team’s performance if not the result.
“I thought overall we are disappointed with the result but we understood the challenge,” he told BT Sport.
“I asked this team to leave an impression. I wanted that to happen individually and as a team from the players and I think we did that, certainly in the second half.”
Manchester United suffer double injury blow against West Ham United
Manchester United manager Ole Gunnar Solskjaer said both Edinson Cavani and Anthony Martial were substituted during Saturday’s 3-1 win over West Ham United because of muscle injuries.
Uruguayan striker Cavani, who scored twice as a substitute against Southampton last weekend, was operating as the central striker against West Ham, but did not come out for the second half at London Stadium.
French forward Martial was forced off the pitch after 62 minutes and was replaced by Juan Mata.
Solskjaer confirmed both strikers will undergo scans ahead of Tuesday’s Champions League encounter with RB Leipzig, with United needing a draw to qualify for the last-16.
“It is unfortunate… sometimes you get muscle injuries. We lost Anthony and Edinson,” Solskjaer told Sky Sports. “There’s a game already on Tuesday.
But It’ll probably be (like this) this season.
“Some games we have to do without players and I’m glad we’ve got the substitutions we have.”
After Tomas Soucek put West Ham ahead, goals from Paul Pogba, Mason Greenwood and substitute Marcus Rashford helped United clinch a fifth consecutive away victory in the league this season. (Reuters)