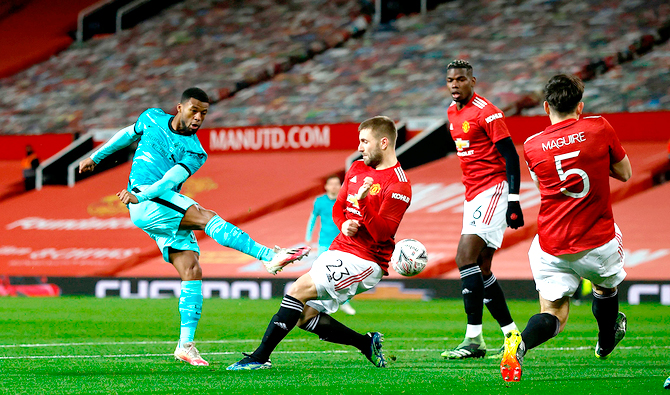 MANCHESTER, January 25: Bruno Fernandes’s stunning free-kick inflicted more misery on Liverpool as Manchester United progressed to the fifth round of the FA Cup with a thrilling 3-2 win at Old Tafford on Sunday.
Both sides struggled to create chances in a cagey 0-0 draw when they met in the Premier League last weekend.
But there was no repeat of that caution in a wide-open contest that ended Liverpool’s hopes of a first domestic cup win under Jurgen Klopp for another season.
The English champions lost a league game at Anfield for the first time in nearly four years to Burnley on Thursday to fall six points behind United at the top of the table.
In response, Klopp named a strong side despite making five changes as Mohamed Salah and Roberto Firmino returned.
Liverpool’s only goals in their previous five games came against an Aston Villa youth team in the last round of the FA Cup after Dean Smith’s side were struck down by a coronavirus outbreak.
But shades of the side that stormed to a first league title in 30 years last season were restored even if Klopp’s wait for a first win at Old Trafford goes on.
Firmino and Salah combined perfectly for the opener on 18 minutes as the Brazilian’s pass opened up the United defence and the Egyptian provided a dinked finish over Dean Henderson.
United have made a habit of coming from behind to win this season and took just eight minutes to hit back.
Ole Gunnar Solskjaer handed Fernandes a rare rest from the start, but still picked a side packed with firepower featuring Marcus Rashford, Mason Greenwood, Edinson Cavani and Paul Pogba.
Rashford’s raking cross-field pass just evaded James Milner and Greenwood did not look like a striker lacking confidence as he fired past Alisson Becker for his first goal in 11 games.
A number of injuries to centre-backs have disrupted Liverpool’s season with Virgil van Dijk and Joe Gomez expected to miss the rest of the season, while Joel Matip has struggled to stay fit.
Klopp has been forced to field two midfielders in Jordan Henderson and Fabinho together at the heart of the defence in recent weeks and the performance of 19-year-old Rhys Williams showed why the German has been reluctant to rely on his young centre-backs.
Williams failed to cut out Greenwood’s through ball for Rashford three minutes into the second half and the England international composed himself before slotting past the advancing Alisson.
This time, United’s momentum was short-lived as Milner should have levelled for Liverpool when he spooned a glorious chance over from close range, but quickly made amends by teeing up Salah to smash home his second just before the hour mark.
Both managers turned to their match winners off the bench for the final half-hour as Klopp first turned to Sadio Mane before Fernandes made his entrance.
Trent Alexander-Arnold stung the palms of Henderson, who then saved twice from Salah as Liverpool’s attack began to click back into gear.
But it was Fernandes who won the game with a brilliant free-kick 12 minutes from time.
This week will be the first anniversary of the Portuguese’s arrival from Sporting Lisbon that has transformed United’s fortunes.
A year ago, United trailed Liverpool by 30 points in the Premier League having played two games more.
The past seven days have shown they are now more than a match for their old rivals.
Fernandes’s strike was a worthy winner of a thrilling tie as he used Pogba to unsight Alisson and fired the ball low into the Brazilian’s left-hand corner.
United will face West Ham in the last 16 next month.
Maddison shines in Leicester’s 3-1 FA Cup win at Brentford

Leicester City’s James Maddison set up one goal and got on the scoresheet in a second-half comeback as they beat second-tier Brentford 3-1 away in the FA Cup fourth round on Sunday.
The Foxes will host fellow Premier League side Brighton & Hove Albion in the next round.
Championship side Brentford took the lead in the seventh minute from a set piece when the ball took two deflections before Danish centre back Mads Bech Sorensen stabbed home his first goal in English football from close range.
Leicester started the second half on the front foot and equalised in the 46th minute after winning the ball upfield before Maddison found Cengiz Under in space for the Turkish winger to curl his effort past goalkeeper Luke Daniels.
Five minutes later, the visitors’ took the lead with a penalty after Youri Tielemans was fouled. The Belgium midfielder got up to send Daniels the wrong way with a low shot into the bottom corner.
Leicester wrapped up the win in the 71st on the counter-attack when Daniels spilled a Harvey Barnes shot and midfielder Maddison was on hand to score his fourth goal in as many games in all competitions. (AFP/Reuters)