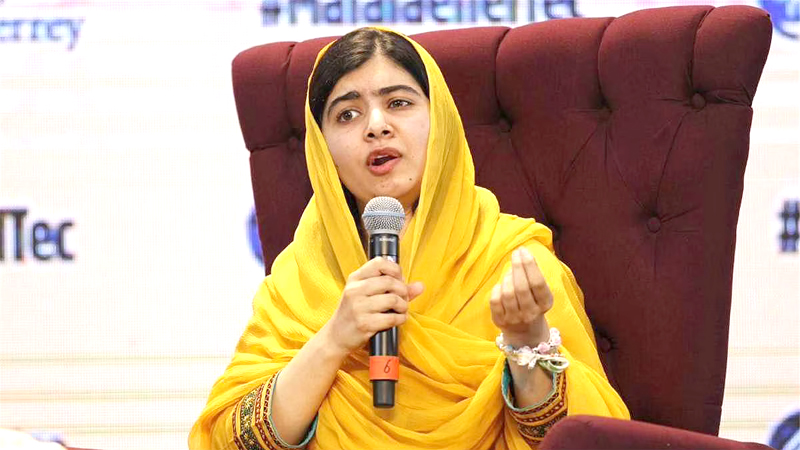 Islamabad, September 20: Malala Yousafzai, the youngest Nobel Peace Prize winner, has said that as many as 20 million more girls may not return to schools even after the COVID-19 crisis is over.
Speaking on the sidelines of the UN General Assembly in New York on Friday, the Pakistani Nobel laureate acknowledged that COVID-19 had been a striking setback to our collective goals , such as educating women, Dawn newspaper reported.
On education alone, 20 million more girls may never go back to the classroom when this crisis ends (and) the global education funding gap has already increased to 200 billion dollars per year, Malala, 23, who once took a bullet from a Pakistani Taliban militant for campaigning for girls’ education in Pakistan, said.
Malala reminded the international community that sustainable global goals, set by the UN five years ago, represented the future for millions of girls who wanted education and were fighting for equality.
Noting that little had been done in the last five years to achieve those goals, she asked the world body, when are you planning to do the work ?
When will you commit the necessary funding to give every child 12 years of quality education? When will you prioritise peace and protect refugees? When will you pass policies to cut carbon emissions? she asked.
UN Secretary-General Ant nio Guterres, who also addressed the virtual event, underlined the need to strike out for a world of dignity and opportunity for all on a healthy planet .
We must look beyond the current crisis and set our sights high to show that transformation is possible and is happening right now, he said.
The UN chief urged rich nations to address the immediate, medium and longer-term needs of developing countries and to support a UN debt service suspension initiative to at least the end of 2021.
He also stressed the need for transition to a more equitable and sustainable economy, ending fossil fuel subsidies and placing women at the centre of building back.
Deputy Secretary General Amina J Mohammed noted that this transformation was already happening everywhere and must not leave anyone behind .
The head of the UN Develop ment Fund (UNDP), Achim Steiner, warned that for the first time in 30 years, the march of progress in human development was expected to go sharply into reverse.
Building people’s resilience against vulnerability, risk and deprivation, and helping them to get on their feet if they falter, defines social protection in the 21st century, he said.
Munir Akram, president of the Econo mic and Social Council, said that the global magnitude of the challenge we are facing as a result of COVID-19, was the greatest since the creation of the United Nations. (PTI)