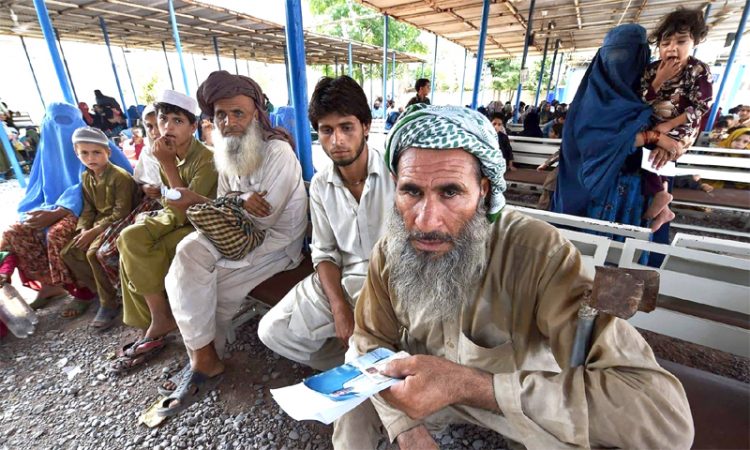 Islamabad, August 1: The international community should create a secure area in Afghanistan to keep the displaced people inside their war-torn country instead of pushing them into Pakistan which is not ready to accept more refugees, Pakistan’s National Security Adviser has said.

Addressing a news conference at the Pakistan embassy in Washington on Saturday, Moeed Yusuf said his country was focused on ensuring that tensions in Afghanistan do not lead to more bloodshed.
But if a situation arises, it is the responsibility of the international community to create a secure area inside Afghanistan, the Dawn newspaper quoted the Pakistani official as saying.
Why make them dar-ba-dar (homeless)? Make arrangements for them inside their country. Pakistan does not have the capacity to take more refugees, he said.
Yusuf described the government’s US policy as pragmatic and unapologetic, but not boastful and urged people not to look for big pictures and all-embracing headlines .
The NSA arrived in Washington on July 27 along with Director General of Inter-Services Intelligence Faiz Hameed for talks with their American counterparts on Afghanistan and bilateral relations.
The ISI chief left Washington on Friday, a day after talks with US National Security Adviser Jake Sullivan at the White House, which was also attended by other security officials from both sides.
We needed direct technical input. This was not a high-level political visit and focused on technical issues, nuts and bolts, said Yusuf while explaining why an intelligence chief had to participate in the talks.
The process of rebuilding US-Pakistan ties began on May 27 with a meeting between the two NSAs in Geneva.
These are structure-built, high-level talks, using multiple channels, said Yusuf. The talks would continue towards rebuilding ties, he said, adding, but you may not get the same feeling as you did in the past of big meetings, big pictures and headlines. These talks are now result-oriented. The focus is on substance, not optics .
Yusuf disagreed with the suggestion that Pakistan had the influence to force the Afghan Taliban to do what they did not want.
We have modest, minimal leverage, but if had the influence some say we do, we would have stopped them from destroying the Bamiyan Buddha in the 1990s. We could have at least persuaded them to force out the TTP, he said.
Yusuf said that in their first meeting, the two NSAs had agreed that Pakistan and the US should continue their holistic bilateral engagement.
Afghanistan of course is the most important and immediate issue, but these talks are focused on how to move forward on multiple issues. This week’s meeting is a follow-up to take stock of the process, he said.
There have been ups and downs in US-Pakistan relations but we need to work ahead. And we got a very positive response in terms of moving forward, he said.
Yusuf urged the media not to expect a revolutionary change overnight in the US-Pakistan relations because of these meetings but to remember that that the countries are focused on substance and have an agreement on how to move forward.
He said Pakistan did not have the luxury of indulging in ifs and buts when it comes to Afghanistan, arguing that every development in Kabul has a direct impact on Islamabad.
Pakistan’s main concern remains peace in Afghanistan, and it would only come if all factions sit together and accept a political solution, he said.
Asked if Pakistan and the US can continue to work as partners, the NSA said he saw a desire on both sides to do so and the talks are about how to do it .
He said the United States understood that Pakistan can help in making a political arrangement in Afghanistan and they were now discussing how to approach this. The biggest thing would be to do a political understanding, other things will follow, he said.
Yusuf rejected the suggestion that Pakistan was accepting travel documents issued by the Taliban as legal documents.
Pakistan does not want any illegal or unwarranted movement. Whatever happens inside is Afghanistan’s issue, not ours. We do not have anything to do with it, he said.
US PresidentJoe Biden said in April US troops would be withdrawn from Afghanistan by the end of August, ending a 20-year foreign military presence.
The Taliban in recent days has swept across Afghanistan, pushing back the Afghan military and taking over significant swaths of territory as the U.S. nears the ends of its withdrawal.

Approximately 650 troops are set to remain in the country to secure the US diplomatic presence in Afghanistan, including the embassy, and to assist in securing Kabul’s international airport, which is a necessary facility for the movement of diplomats. (PTI)