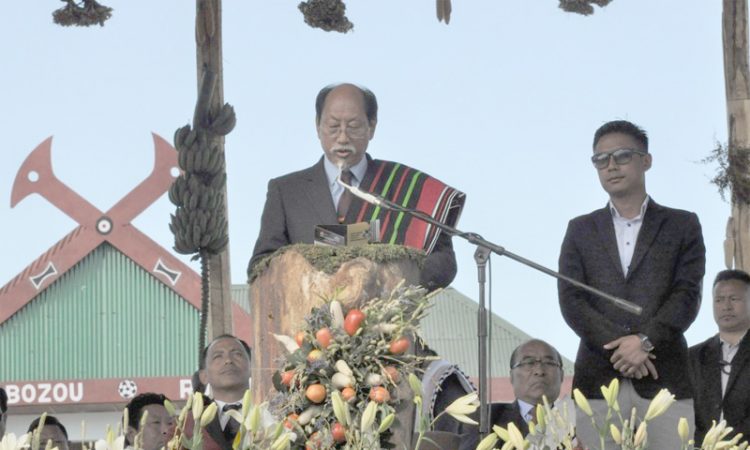 Kohima, December 5: Nagaland Chief Minister Neiphiu Rio today called upon youths to have a set of vision and maintain unity and integrity as the symbol of their lives.
Addressing the Northern Angami Youth Organisation (NAYO) 25th anniversary cum stone pulling ceremony on the theme “Kemiatho Khrühe” coinciding with the 19th Hornbill Festival at Northern Angami Centre, Chiephobozou, the Chief Minister, who was the chief host of the event, lamented that Naga society today is divided into many organisations, both overground and underground, with difference in opinions and views even in smaller organisations. He urged the youths to develop unity and understanding not only within themselves but also in the society at large.
Emphasising on the role of youth, Rio reminded that youths are the backbone of the society, and the society will remain strong and united as long as the youth organization is united.
Observing that organizing the stone pulling ceremony coinciding with the State Hornbill Festival was a sign of unity and understanding, the CM urged the youths to be positive in their thinking and live positively with one another.
Stressing on the importance of preserving natural resources and protection of our unique culture and tradition, Rio challenged the youths to come forward and lead the society so that our future will be meaningful and resourceful. “With the advent of education and civilization followed by technology, the world is changing even in span of short duration but we have to respect and learn to appreciate mother nature,” he said.
On agriculture and horticulture, the CM urged the youths to adopt scientific farming in agricultural system and promote organic production in order to develop self employment.
MLA and co-host, Khriehu Liezietsu while thanking the pioneers and founding members of the organization said jubilee is a time to remember the past achievements and also to rectify the mistakes committed hitherto. He reminded that jubilee is a time to forgive one another and introspect the future with unity and understanding.
NAYO first president, Prasilie Pienyu; president NAPO, Neiyalie Pfusenuo; president AYO, Neinguvotuo Krose also spoke on the occasion.
Earlier, MLA, Khriehu Liezietsu hoisted the NAYO silver jubilee flag at Meriema. The flag was hoisted in commemoration of the first NAYO conference held at Meriema.
Later thousands irrespective of age and clad in traditional attires carrying indigenous guns participated in the stone pulling ceremony. (Page News Service)