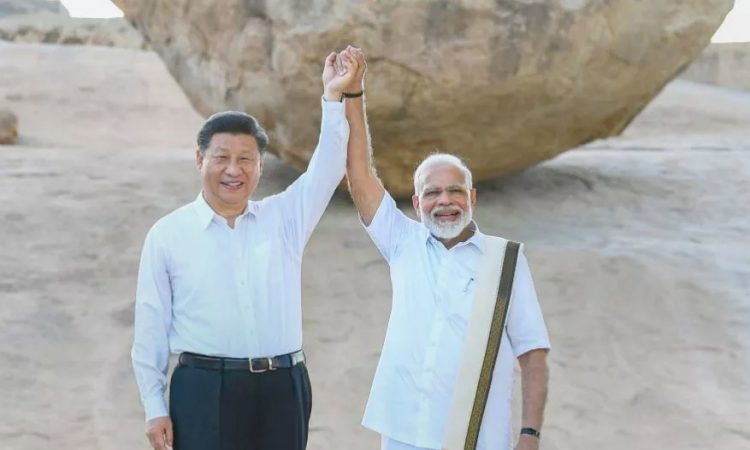 New Delhi, October 11: Kicking off their two-day informal summit, Prime Minister Narendra Modi and Chinese President Xi Jinping engaged in a casual conversation in a serene setting in Tamil Nadu’s Mahabalipuram (Mamallapuram), about 55 kms away from Chennai.
This is their sixth meeting since the first informal summit in Wuhan in April 2018, and the third since Modi’s re-election in May. As per sources, Modi will explain the reasons and nuances behind the Jammu and Kashmir decision during their meeting.
External Affairs Spokesperson Raveesh Kumar describing the first day of the summit, wrote on Twitter, “Concluding a highly productive day with a pleasant conversation over a long dinner. PM Narendra Modi and Chinese President Xi continued their exchange of views on deepening of the India-China partnership over a breathtaking Kalakshetra cultural performance followed by dinner.”
Dressed in a traditional Tamil attire veshti with an angavastram, Modi took Xi Jinping on a guided tour around the coastal town showing him some of the famous world heritage sites including the Shore Temple, Arjuna’s Penance, the Pancha Ratha and posed in front of the Krishna’s Butterball.
Modi and Xi, assisted by their respective translators, sat down at the Pancha Ratha complex sipping on coconut water as they engaged in talks. Later, they visited the Shore temple, a symbol of the historic Pallava dynasty, where they were joined by top-level delegates. Keeping up with the Tamil setting of the event, Modi also gifted Xi a Nachiarkoil lamp and a Thanjavur painting depicting a dancing Saraswati.
At the end of the cultural program, both the leaders indulged in a traditional South Indian spread which was a part of the dinner menu. The feast included a mix of vegetarian and non-vegetarian delicacies such as the trademark sambhar and thakkali rasam.
Meanwhile, earlier today, the Chinese leader was welcomed by Tamil Nadu Governor Banwarilal Purohit, Chief Minister Edapaddi Palaniswami and Deputy Chief Minister O Panneerselvam at Chennai airport. Sharing pictures of his arrival, PM Modi tweeted, “Welcome to India, President Xi Jinping!”. Jinping is accompanied by a 90-member delegation which includes Chinese Foreign Minister Wang Yi, Polit Bureau member of Central Committee of Chinese Communist Party Ding Xuexiang and State Councilor Yang Jiechi.
The Chinese President’s visit today came two days after India objected to his reference to Kashmir during a meeting between Jinping and Pakistan Prime Minister Imran Khan. India then reacting to China’s “paying close attention” to the situation in Kashmir statement, had said, it was an internal matter and “not for other countries to comment” on its internal affairs. Government sources, however, had told The Indian Express that Kashmir issue will not figure at the summit prominently unless Xi brings it up.
As per the schedule tomorrow, the two leaders are expected to hold delegation-level talks at Taj Fisherman’s Cove Resort and Spa in the Mahabalipuram where they are likely to discuss the new and updated confidence-building measures (CBMs) along the border and trade, among other things. The talks will be followed by lunch, as the Chinese premier is scheduled to depart for Chennai airport around noon.
According to PTI, officials on both sides are likely to focus on ways to boost bilateral trade and development cooperation between the two countries and also touch upon the boundary issue. (Agencies/PTI)