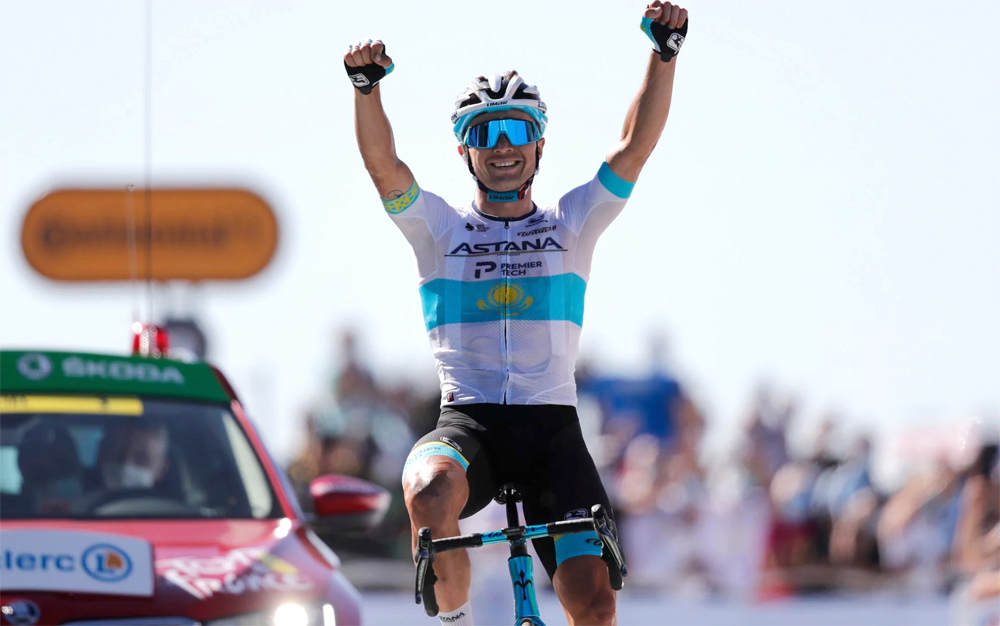 MONT AIGOUAL (France), September 3: Alexey Lutsenko of Astana won stage six of the Tour de France on Thursday completing a long breakaway over two mountains in the magnificent Cevennes National Park.
Briton Adam Yates held on to the overall leader’s yellow jersey despite a dramatic late bid by Frenchman Julian Alaphilippe to snatch it back with a trademark kick to the finish that clawed back a few seconds.
“It went really well, with an escape with big riders we needed to control, but a good day for us,” Yates said.
“Tomorrow should be easy,” said Yates when asked about Friday’s flat stage, where he will likely keep the overall lead.
There was no other attempted attacks from among the favourites on a mountain stage. The race, which culminates in Paris on September 20, still a long way to go.
Lutsenko of Kazakhstan, started the day trailing Yates by more than five minutes as the peloton left the Ardeche region. He joined an escape group including Olympic champion Greg Van Avermaet on his golden bike, who finished third 55 sec down. Spaniard Jesus Herrada was second.
“That was the most beautiful win of my career,” said the Kazakh national champion, who has also won a Vuelta stage.
“It was important for my team Astana too.”
Lutsenko did not falter on the final climb.
“Near the end I knew Herrada couldn’t catch me,” he said.
Alaphilippe lost the yellow jersey on Wednesday when a careless late waterbottle pick-up cost him a 20 seconds time penalty.
Alaphilippe and the 170 other riders embarked on the 191km route through dozens of pretty villages perched along the gorges where most of the signs however were in support of the emotional Thibaut Pinot, France’s favourite ‘boy next door’.
Notoriously moody, Pinot stopped to chat with the press Thursday, which was interpreted as a good sign by the French media pack.
“I’m feeling better and better,” said Pinot, who fell hard on day one in the rain at Nice.
Stage seven takes the peloton back through the plains with a 168km run to Lavaur, where British sprinter Mark Cavendish won back in 2011. (AFP)