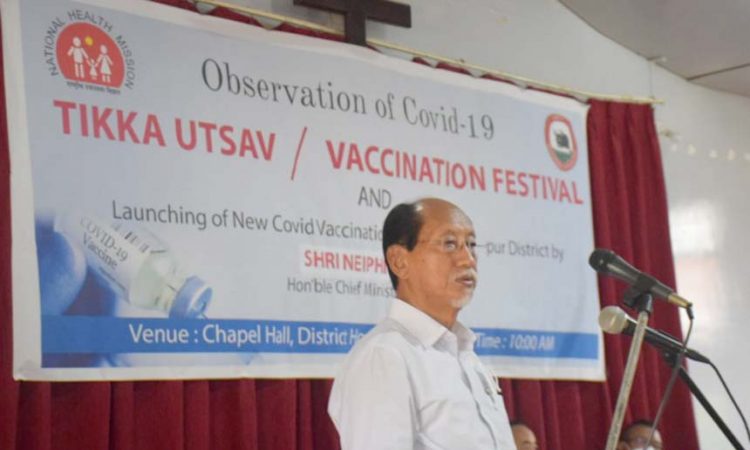 Dimapur, April 13: Chief Minister Neiphiu Rio on Tuesday admitted that the coverage of vaccination in Nagaland is still low despite healthcare workers doing their part well.

According to him, this is happening because people are being misguided by rumours and are hesitant to take the vaccine.
Speaking on the occasion of the observation of COVID-19 “Tikka Utsav/Vaccination Festival” at Chapel Hall, District Hospital Dimapur, as well as launching of new COVID vaccination centres in Dimapur, Rio proposed that people should be reached via Village Councils and Village Development Boards, and it should be made clear to them that the vaccines are there for the safety of the people.
He said while there are countries where the demand for vaccines is not being met, India has been fortunate to “have a large supply”, which is sending to other nations also. He called it a good opportunity that the vaccines are being given to the people free of cost by the government.
He, however, maintained that being vaccinated doesn’t necessarily mean immunity to the virus as people still can get affected, and therefore appealed to all to continue to maintain social distancing, wash hands regularly and follow other safety protocols.
On Dimapur registering half of the positive cases in the State, Rio said that Dimapur is a gateway and well-connected and it is not possible to stop people from other parts of the State to come here. It is the responsibility of all to contain the virus, he said and asked people in Dimapur and the bordering areas to be on alert.
He further said that there are countries and States in India which do not want to impose lockdowns despite huge spikes because of the economic impacts. He mentioned that in States where elections are being held, no protocols have been maintained which is worrisome.
He also congratulated the healthcare workers for their works and urged the people not to think that they are safe despite the State doing better than others. He said that the State is still in green zone and it should be kept so.
CMO of Dimapur, Dr. Mereninla Senlem gave a brief summary of how the medical department along with the DTF Dimapur, NGOs and communities, are handling the pandemic in the district since the beginning.
She shared the need for an oxygen generation plant at the hospital. She also mentioned that the department had recently conducted random testings at different locations in Dimapur, testing 32 persons, all of whom returned negative for the virus.
Dr. Rebecca Y Sema, District Immunization Officer, revealed that till April 12, 3,003 healthcare workers, 13,244 frontline workers and 8,452 people above the age of 45 years in the district had been vaccinated and has sufficient stock of 14,230 doses more stored in different locations across the State.
She said that in order to maximize coverage, the vaccination centres will remain open throughout the week.