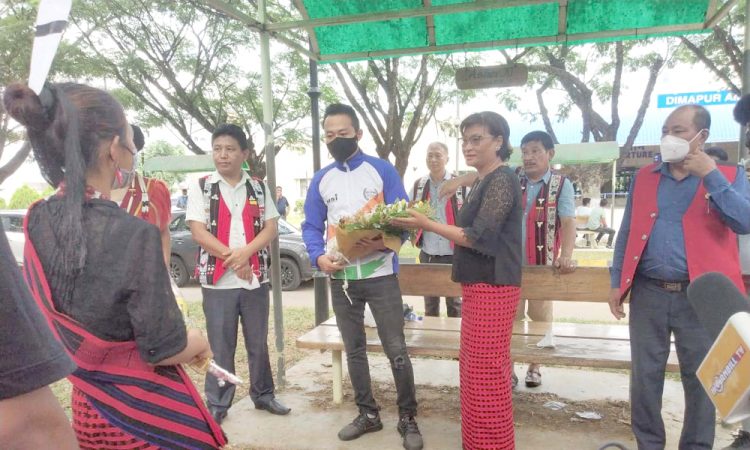 Dimapur, August 31: Longtsukumba Ao from Longsa, who represented India at the GAMMA Asian MMA Championship 2021 at Kyrgyzstan and won Silver Medal in the welterweight category, received a warm welcome by his family, friends and supporters at Dimapur airport on August 31.

A short program was held at the airport organized by the Longsa Union, Dimapur where member of Longsa council said it was a glory day, not only for Longsa people but for all the Naga people. He said that it is an honour to our people to receive such a prestigious international medal and mentioned that it was Lontsukumba’s hard work and determination that made him achieve his victory.
Talking about his experience, Longtsukumba said that he was nervous at first to compete with people from different countries, but he was able to overcome his nervousness and proceed towards his goal. Since it was his first time to play internationally, he said that he had to train and work extra hand while pushing himself beyond his limits.
Commenting about his achievement, he said “I thank God for giving me the strength and blessing to achieve my goal, and for me, this step is only the beginning. I will work harder and do better in the near future.”

Talking about his next plan, he said he will be preparing for the World Championship which will be held in Germany in December. (Page News Service)