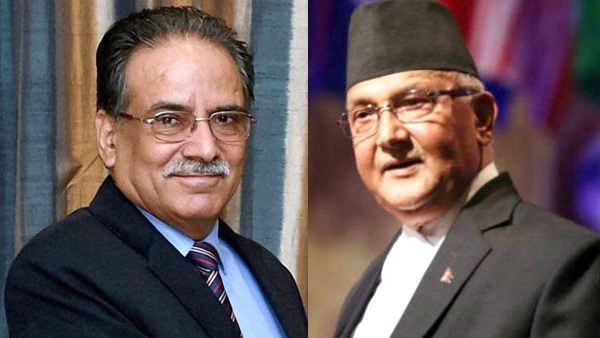 Kathmandu, August 7: Nepal Communist Party’s executive chairman Pushpa Kamal Dahal ‘Prachanda’ has asked the party workers to prepare for the “worst” as the ongoing power tussle between him and Prime Minister K P Sharma Oli has intensified with no solution in sight.
Oli and Prachanda have held at least ten meetings in recent weeks to sort out the differences between them. But, as the Prime Minister did not accept the condition of one-man-one-post, the talks failed. Oli has refused to give up his post as prime minister as well as a co-chairman of the Nepal Communist Party (NCP).
A bitter internal feud has been brewing in the ruling NCP since the last few weeks after top party leaders, including Prachanda, demanded Oli’s resignation, saying his recent anti-India remarks were “neither politically correct nor diplomatically appropriate.” The opponents of Oli are also against his autocratic style of functioning.
“Our main concern is not about gaining power, what we want is to follow the proper procedure while running the NCP. We are not focusing on gaining any position, but our fight is against the wrong trend developing in the party,” Prachanda told a select group of journalists during a special briefing on Wednesday.
He held the press conference along with three senior party leaders Madhav Nepal, Jhalanath Khanal and party spokesperson Narayan Kaji Shrestha, according to Nagarik daily.
The dissident group accused Oli of trying to damage the image of other senior leaders of the party, the daily reported.
Prachanda and Nepal have claimed that the majority of the powerful Central Working Committee members have supported them while raising voice against Oli. Prachanda also alleged that while the Standing Committee meeting was in progress, at the initiative of Prime Minister Oli a new party was registered under the name of a lesser-known person at the Election Commission with the intention to split the ruling party.
“If one chairman (PM Oli) does not follow the proper procedure of the party then how can the unity of the party remain intact,” he wondered.
Prachanda claimed that he and other senior leaders of the party were trying to save the party by creating a favourable situation.
“We are trying for the best outcome but the communists of this country should also be prepared for the worst thing to happen,” Prachanda told media persons, indicating a possible split in the ruling party.
“I had agreed to make Oli Prime Minister for a full 5 years term and enjoy the executive chairman’s position in the party for creating a better environment within the party,” said Prachanda. “Oli has dragged the party towards anarchism by calling separate gatherings,” Prachanda said.
During the press briefing, the senior leaders also accused Prime Minister Oli of making political appointments on his own choice without consulting with the party.
Madhav Nepal accused Oli of working in the vested interest of a certain group and encouraging corrupt people while making appointments.
Party spokesperson Narayan Kaji Shrestha said that Oli is running the government on his personal whim.
Does the government belong to the party or a person? He asked.
Meanwhile, PM Oli’s chief advisor Bishnu Rimal has slammed Shrestha.
“Don’t encourage groupism in the party at a time when the country is passing through a crisis. Enough is enough,” he wrote on Twitter.
On July 28, Prime Minister Oli postponed the crucial Standing Committee meeting for the ninth time.
While Oli wants to call the Secretariat meeting to resolve the differences, Prachanda says it would be inappropriate to call the Secretariat meeting as the Standing Committee meeting that was put off on July 28 is yet to be over.
Prime Minister Oli wants the Secretariat meeting to resolve the key issues of an intra-party dispute as he now commands a majority in the nine-member body.
Prachanda, who is backed by senior party leader and former prime minister Madhav Kumar Nepal, believes that the Standing Committee could take decisions favourable to him as their faction commands a comfortable majority, according to reports. (PTI)