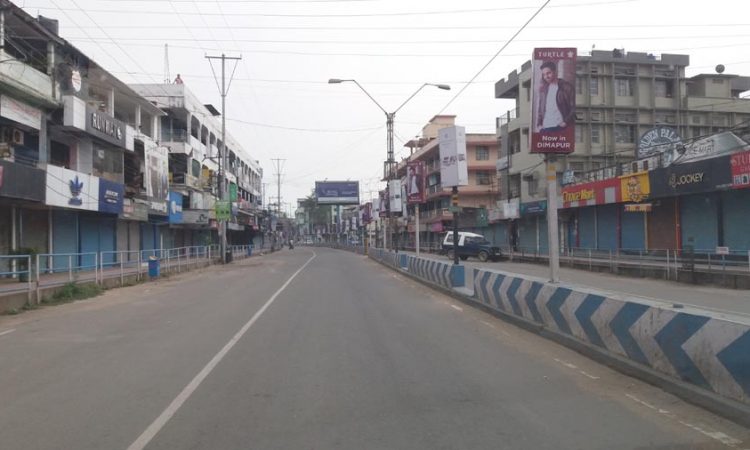 File photo of lockdown in Dimapur

DIMAPUR, MAY 3: The recent surge in COVID-19 positive cases in Nagaland, followed by the State Government’s directives and fresh SOPs to contain the spread of the virus, has raised fear and apprehension amongst the people of Nagaland, especially in the commercial hub, Dimapur.
The fact that Dimapurians had witnessed the worst during the 2020 lockdown, which affected the lives of every citizen, with traders suffering the most, the fear of another lockdown this year has got most businessmen worrying.
Despite daily increase in the number of COVID-19 cases across the country and rise in the number of deaths, the Centre has decided not to impose nation-wide lockdown like last year. It has left it to the States to impose lockdowns area-wise or create containment zones where the number of COVID cases is rising.

However, the Supreme Court of India late Sunday night asked the Central and State Governments to consider imposing a lockdown to curb the virus in the second wave, in the interest of public welfare.
The Supreme Court’s directive has come when India is witnessing more than 3 lakh COVID-19 cases every day, with an alarming rise in almost all States.
How effective will a lockdown be at this juncture to curb the spread of the virus is still debatable as many feel that COVID-appropriate behaviour is more important than lockdown.
In Dimapur, people have diverse views on the Supreme Court’s directive to the Centre and the State Government. While some favoured another lockdown, the majority were against it. Nagaland Page reached out to the common people to get their views on it.
There is no doubt everyone suffers during a lockdown, but it helps to contain the spread of virus to some extent, a prominent businessman told Nagaland Page. He said the national lockdown last year has prevented the spread of Coronavirus to a large extent. However, he said complete lockdown affects the businesses and economy of the State.
Citing examples of closure of New Market and Hongkong Market for months together, he said many businessmen lost their savings during the lockdown and were down to penury. Some resorted to selling different items on footpath to support their families. He was of the view that lockdown should not be imposed in Dimapur, rather strict measures should be taken to curb the spread of the virus.

Talking to Nagaland Page, a young man, Bendang Longkumer said, “Lockdown should be imposed only when there is a clear strategy of combating the spread of the virus. We have already allowed it to penetrate too deep. It will not be of much help just to impose lockdown.”
Another youth commented that imposing lockdown now will not change the fact that “we are losing people every day, and instead of imposing lockdown, our Government should be arranging medical facilities and proper centres to cure the affected people”. Providing the right treatment should be the State Government’s priority, he added.
A 29-year-old woman named Avi said that she lost her best friend to Coronavirus just a few days ago. She said that the inability to say her last goodbye or to even have the last glimpse of her friend left a scar that is burying her in guilt. She said that she does not wish anyone to go through the same pain and guilt, and requested the State Government to impose total lockdown in the State to break the chain of virus.
“We are a poor State with the least facility and development to take care and save the lives of those suffering from the virus. The majority of the population will lose their lives if the number keeps on increasing,” she said.
An elderly woman felt that imposing another lockdown is better than losing more lives. She said that the State Government can provide basic necessities to the people, especially to the less privileged.
“Since it is not a one-on-one battle against the virus, the people and State Government should hold hands and fight against the virus. The State Government should focus on saving lives, while the people focus on following the guidelines properly,” she suggested.
Another young woman, Ben Jamir, said that lockdown should be imposed because “our people do not understand the severity of the situation”.

She added, “If we are hit by COVID, as in other States, we don’t have the infrastructure or the medical expertise to tackle the situation. On top of that our Government can barely tackle our everyday problems like roads, electricity and unemployment, let alone a pandemic.”
Another woman replied by saying “lockdown should be imposed because life won’t go on if COVID takes it away”.
President of Nagaland Medicine Dealers Association, Ato Yepthomi said there is no need to impose lockdown in Dimapur. “Why should lockdown be imposed in Dimapur? The Government should take strict measures at the entry points from where people come to Nagaland,” he said.
He said lockdown is not a solution to contain the spread of virus. In Dimapur, the virus is being brought by people from outside; therefore, the Government should keep a strict eye on the people coming from outside the state, he maintained.
Vijay, a grocery owner, was also not in favour of lockdown in Dimapur. “Last year, I suffered a lot due to the lockdown. Though grocery shops come under essential commodities and was exempted from the lockdown, my shop remained closed for months,” he said.
Many businessmen expressed the same opinion when asked about the lockdown. They were of the view that lockdown will do more harm than good in a small State like Nagaland, where the economy is in tatters already.
Nagaland Page also reached out to people who earn their living by working daily at various construction sites. They were the most affected during the previous lockdown and said that they would not like to see such measures being taken by the Government.
Rafiq Ali, a daily wage earner, lamented that lockdowns take away their earnings and leave them without food. “Pichhale saal lockdown main mera sab kuch khatam ho gaya. Mere paas kuch bhi paisa nahi bacha (Last year I lost everything. I have no money left with me),” he said adding that the Government should not impose another lockdown.
An autorickshaw driver, Krishna, said that almost all of his fellow drivers had suffered during the previous lockdown and some even left for their native places, driving their auto rickshaws, as there was no earning left in Dimapur.
Expressing gratitude to several NGOs who had provided relief to the autorickshaw drivers and their families, he said that lockdown measures are not good to poor people like him.
A person associated with a private firm in Dimapur, on the condition of anonymity, revealed to Nagaland Page that he knows of two private companies operating in the city where few employees were tested positive for Coronavirus.
This prompted the managements to ask other employees to get tested. However, the employees who were sent to get tested for the virus were not provided any mode of transport, forcing them to take public transport to search for testing centres. Subsequently, among those who took the public transport, more were tested positive.
He said that it is necessary that Dimapur should be put under strict lockdown immediately as, if things remain the same, the virus will engulf the district quickly. In that case, the lockdown can be needed for months, which now might not be necessary, and two weeks should be enough, he added.
According to him, the lockdown is inevitable and the sooner it happens the better. He also had to go without salary during the nation-wide lockdown last year and worries more about being cast out of the colony of being infected than the infection.
Ratan, who runs a small ticketing shop near the East Police Station, Dimapur, told Nagaland Page that he doesn’t want a lockdown in Dimapur as his income is already minimised and since the lockdown last year, his money has been stuck with Air India which has not refunded the fares after the flights were cancelled.

He said that the ones he could convince, he had. But there were many clients who would not care to listen or understand the circumstances and he refunded their flight fares from his own pocket, said Ratan.
He said that despite the lockdown, he had to continuously pay the rent.
With only a few trains running now, it is still not enough for him as things are not like before and barely anyone tries to get “tatkal” tickets from him due to fewer people travelling.
Ratan said that he knows people who sold their shops at one-fourth of their value as they were unable to generate any income and the rents were accumulating. He fears that with the strict imposition of screening now, more people will avoid travelling and this will have a direct impact on his business.
(Page News Service)