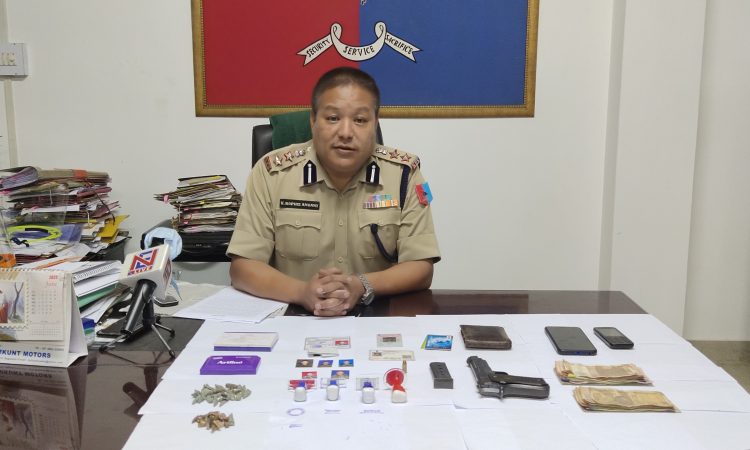 SP Kohima Kevithutho Sophie along with seized pistol & ammunition and other documents during the press briefing on June 23, 2020.

Kohima, Jun 23: An Anti Extortion team of Kohima police today shot dead a ‘discharged’ army personnel while extorting money from shop-keepers in the State capital, said SP Kohima Kevithutho Sophie.
Briefing media at his office tonight, Sophie said that acting on a tip-off about suspected anti-social elements extorting money from shop-keepers in the name of NSCN-K (Khango), the anti-extortion team was alerted while the two extortionists were spotted at a shop near Y Junction in the heart of the capital town at around 4 p.m.
He said that the police team asked them to surrender and they managed to pin down one of the miscreants who tried to pull out his arm for confrontation.
Another miscreant tried to snatch the loaded arm of a police and during the scuffle he was shot dead, said Sophie.
The deceased was identified as one Khehuto I Assumi (35) s/o Lt Izeho Assumi of Lizutomi village, Zunheboto district.
The SP said that he was serving in 164 Battalion Territorial Army but discharged on medical grounds in November 2019.
Sophie said that police seized one .32 pistol, one magazine and one live ammunition along with extorted money amounting to Rs 1880 from the two extortionists.
They had been forcibly collecting Rs 100 each per shop from Tin Patti area till Old MLA Hostel junction today, he said.
The other accused identified as Aito Aomi (25) has been taken police custody, he said, adding on raiding the accused miscreant’s house at New Reserve Kohima, police recovered four fake seals of OC Police Station Zunheboto, Head GB Lizutomi, Capt/Maj/Lt. Colonel MO I/c Room 164 Infantry Battalion TA (Heart & Home) Nagaland along with round seal, two stamp pads and several numbers of assorted fired bullet heads and pellets.
Meanwhile, the SP Kohima said in the aftermath of the nationwide lockdown, there has been reports of increase in anti-social activities with miscreants engaged in highway robbery, breaking of groceries in secluded areas and forceful collection at gunpoint from shop-keepers.
He said in order to control such menace, the Kohima police has formed the anti-extortion team and till date already four such groups have been nabbed from different places. (Page News Service)