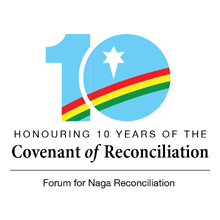 The 10-year anniversary of the Covenant of Reconciliation is an important moment for us. It is a moment to celebrate the efforts of a movement that was instrumental in reducing the factional violence and encouraging Naga people to embrace a vision of reconciliation.
As I began to reflect on this task – to contribute 1500-word essay – an exhaustion set in. Will I make sense writing about this monumental initiative? Voices of critiques who rejected the idea of Naga reconciliation, underlined the weakness and flaws of members involved in the initiative, their lack of understanding Naga politics, or being blind to tribal and class politics, started to surface in my mind. I began to worry about the language and the purpose of this task and began to fear those who will read this essay and relegate it as a piece of rubbish, and many others who will call me a dreamer. I began to censor my thoughts and set up a theoretical framework that would perhaps privilege my intellectual ability and depart from anything sentimentally Naga or ordinary that we witness every day in Naga society. I almost evacuated my soul from this essay.
And then I remembered a story. When I was child my mother told me a Lotha Naga tale called Apfu Le LeLe. In Lotha Apfu means mother and Le LeLe the sound made by villagers to communicate and guide the cattle to the barn at sunset. In my mother’s version the story takes place in a faraway Lotha village. Once upon a time, a happy family – mother, father, daughter, and an infant baby boy – lived together. One day the mother found out that a small pair of antlers were growing on her head. She was turning into a deer. Knowing that her husband would kill her (as was the custom when humans turned into animals in the village), she went away to the jhum field. As days went by, the father grew suspicious. When he arrived at the jhum fields and discovered that his wife had turned into a deer, he began to hunt her down. Rushing to the upper elevations of the field, the daughter waved her scarf shouting, “Apfu Le LeLe” and warned her deer/mother to flee.
The father eventually killed the deer/mother and cooked the meat for the household that evening. When the daughter refuses to eat it, the father is enraged, and she is reprimanded. She has no agency to reject this offering. As a member of the household, she must participate in this activity. Finally, the father summons the daughter and a conversation takes place.
Father: Here, take a piece of the heart.
Daughter: No. It is my mother’s heart. With this heart she loved me, so I will not eat this piece.
Father: Here, take a piece of the thigh.
Daughter: No. It is my mother’s thigh. I sat on the thigh and she sang for me, so I will not eat this piece.
Father: Here, take a piece of the feet.
Daughter: No. It is my mother’s feet. She carried me on her back and walked me to places, so I will not eat the feet.
Father: Here, take a piece of the eyes.
Daughter: No. It is my mother’s eyes. With these eyes she lovingly looked at me and loved me.
Eventually the father forces the daughter to pick a piece of meat, but she throws it away beside a river and the meat becomes a plant.The story has a happy ending though as the mother rolls down a ball of yarn from the clouds and takes away the children.As a child, I teared up every time my mother narrated the conversation between the father and the daughter. I marveled at the speech of the daughter and the strength of the mother’s spirit to stay alive and transform into different elements – from a deer to a plant to a woman floating in the clouds – just to remain connected and communicate with the children who longed for her.

Beauty during the Lockdown

Coronavirus: How India will play a major role in a Covid-19 vaccine

Public Health during Pandemics and Beyond

Beat negative feelings during these days of Covid 19

Taking care of your hands during Covid 19

Journalism in the Time of Covid-19

Why does India have so few Covid-19 cases and deaths?