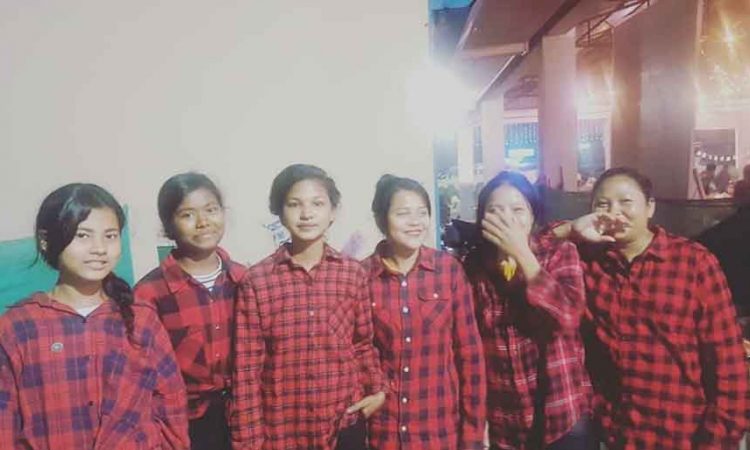 Meshinshe Jamir
DIMAPUR, MAY 20: Facing various roadblocks on the traditional route, many local entrepreneurs are entering the online market to “widen their horizon”.
Talking to Nagaland Page, 37-year-old Anna S, who weaves traditional attires of various tribes, said that she has been in the business for about 15 years. She learnt the trade at an early age by weaving small shawls out of discarded wool from her mother’s loom.

At first, her mother taught her how to weave to keep little Anna from disturbing her. What started as a distraction ploy later turned into a hobby and profession.
Along with her mother, Anna started weaving shawls and mekhelas when she was in her late teens to help augment the family’s income.
Since weaving was very popular at that time, she said that the business was very competitive. She would try to finish her work in a day, which would lead her to sit in one place for hours, just so she could sell her work and earn some money.
Gradually, she learnt how to make traditional coats for men and other accessories with the help of her mother and others who specialised in making accessories. “I received orders from and outside the district, and it was the start of my profession,” she said.
Her business bloomed after she used social media as one of her platforms to advertise her work. “I received a call saying that they wanted to order 12 sets of Sumi men and women’s full accessories. They told me that they saw my work, which one of my customers had shared on social media. So I was inspired to use this platform as a means to enhance my network,” shared Anna.
Asked about the health of her business pre- and post-online venture, she said that her offline business was limited to a certain number of customers. But the online venture has helped her attract attention not only from customers of Nagaland but also other parts of the country, where people are fascinated by traditional Naga designs and culture, she said.
“I don’t have my personal social media account, I think I am way behind in technology. But my kids have helped me to put up my work on social media business pages, where they advertise my work and help me gain customers,” the 37-year-old mother said.
For certain, the pandemic has made things difficult, but she is willing to continue working hard, saying, “Being a Naga, it makes me feel proud to weave about our roots and cultures.”
The owner of “Balloon Buddies”, who has been running the business for 11 months now, started her journey after her daughter turned 1.
According to her, her interest was sparked “after discovering the wonders of balloons”, so she started her own line by importing merchandise from China initially. But after the lockdown last year, she settled for products from within India.
Six months into the business, it became a full-time job.
As the business blossomed ‘tremendously’, the team of 4 members worked passionately at the “Balloon Buddies” workshop.
“I am lucky to have friends and families who helped me promote my business on different social media platforms; and the rest is sheer hard work, being online 24×7, trying to promote myself as a balloonist and using paid promotion to scale and reach larger crowds,” she shared.
“Since I started my business during the start of the pandemic, without having to leave the safety and comfort of my home, was definitely a challenge. But it also gave me time and experience to learn more about the business in a different platform. So I’m thankful that social media exists, especially Instagram,” she added.
According to her, parents, especially mothers, are the ones who show their gratitude for her service, because kids ask their parents for the balloon decorations when they see them on TV and other media.
“Since finding or buying what the kids ask for is one of the hardest things to do for a parent, the parents are glad that ‘Balloon Buddies’ are providing them with the desired balloon decors,” she said.
One of the popular food Instagram accounts is “Wok Tales”, a self-investment business based at Dimapur. The owners, who were working in a different line of business, had reached a dead-end when the pandemic and lockdown happened.
Prompted by the need for sustenance and their love of food, the 4-member team opened “Wok Tales”.
“We are active only on Instagram and thus we are dependent solely on the stories and feedbacks of our customers for our growth,” they said.
With their locally-sourced food items, they started the business during last year’s lockdown and the response has been “consistently wonderful”, they said.
“Ever since the lockdown happened last year, social media has been a life-saver. We are able to reach out to every nook and corner of Dimapur,” they shared.
Now, the “Wok Tales” team members harbour dreams of starting their own restaurant in future.
Another local entrepreneur, who completed his Masters in Political Science, is a self-taught baker. It was his hobby to bake cakes and cookies but he never considered making a living out of it until he completed his studies and was jobless for a whole year.
He tried appearing, unsuccessfully, for departmental and NPSC exams. So he decided to find ways and earn a living instead of sitting at home “without any direction”. With regards to the surge of unemployment rates in Nagaland, he thought it would be better to take action instead of waiting for an opportunity to get employed.
He started his business by baking birthday cakes for his family members and friends, who helped him reach to more customers through social media. “If it weren’t for social media, I wouldn’t have received as many orders and would have been stuck somewhere between no customers and no profit,” he said.
“Social media is a very big platform; it’s not a platform only for celebrities and influencers. We can also use it as a means to earn a living by approaching it in a proper manner,” he added.

Another young entrepreneur said, “The thrift market has taken social media by storm, and I’m one of the owners. Clothes, in general, grab the attention of people as it is a necessity. Starting and maintaining the market value itself is a challenge but the outcome pays for my necessities,” he said.
After staying ‘unemployed’ for 4 years, he started the business to provide for himself and his family. Initially it was challenging, given that he jumped into the world of business without any previous experience, but slowly he was able to pick up the rhythm and developed it into a stable line of work.
“I give credit to social media for enhancing my business, to grow and reach larger crowds. Who would have thought that the platform where I used to waste all my time would become a platform through which I earn and sustain myself,” he added.
Nagaland Page reached out to some customers for their takes on shopping online, particularly social media pages. A young man said, “It’s understandable that they are taking the trouble of providing ready-to-eat food, but the charges are a little too expensive along with delivery charges. I hope they understand the customers’ problem and reduce the amount a little, other than that the food is always good.”
A woman replied, “I often used to buy from thrift stores online, they charge more than they should and most of them do not accept return of products which I don’t understand, because sometimes the size don’t fit me like I thought it would. And since they don’t accept it, I end up giving it away to others. So I don’t shop from thrift stores anymore.”
Some said that they don’t trust shopping from social media pages “since there are many scammers”. There were also people who said that social media has made their life easy and comfortable, especially when it comes to delivery all over Nagaland.
Social media marketing is indicative of Nagaland’s ambitious youths. With unemployment plaguing the State, youths are coming forward with numerous diverse ideas to survive and make it on their own.

A woman, who is trying to create awareness about ceramic and pottery by focusing on functional items, created her own market on social media under the name “Fire and Earth” in 2018, and has been working with ceramics since then.
She said, “Social media, when used appropriately, is such a vital tool that helps you grow. Especially with work like mine that is so new to the region and doesn’t have a community to share with and learn from, social media plays such a big role. It helps me stay connected with the potters’ community not just in the country but all over the world.”