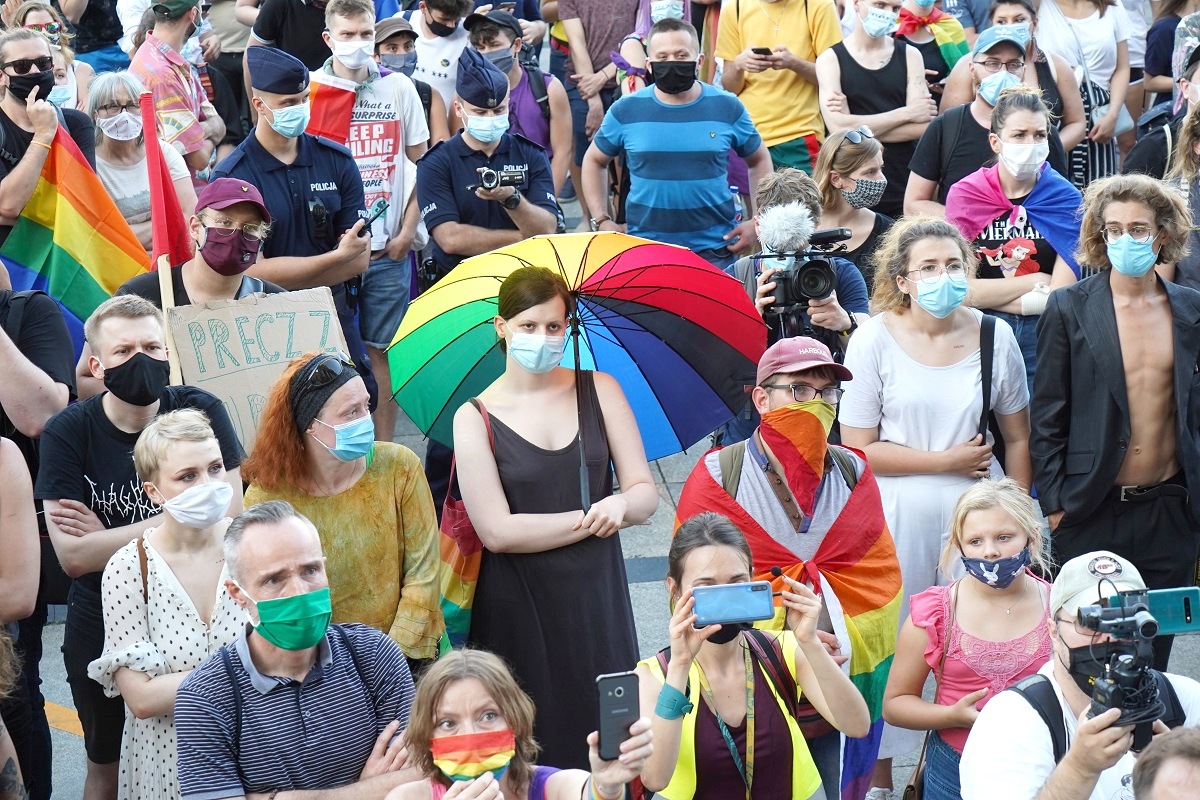 Thousands of LGBT supporters demonstrate in central Warsaw against the detaining of the gay-right activist Margo in Warsaw, Poland (Photo: AFP)

WARSAW, AUGUST 9: A large crowd of LGBT rights supporters gathered in Warsaw on Saturday to protest the arrest of a transgender activist who had carried out acts of civil disobedience against rising homophobia in Poland.
“You will not lock all of us up!” people chanted at the demonstration that appeared to have drawn thousands, many of them young adults. Most wore masks to battle Coronavirus.
Saturday’s protest comes a day after LGBT rights supporters scuffled with police who arrested the activist, Malgorzata Szutowicz, known best as “Margot.” Police said they detained 48 people, while activists said police used rough tactics against them.
“The police were aggressively pushing the protesters out of the way, knocking people to the ground and holding them down with their boots,” the group said.
The protests come amid an intensifying standoff in Poland between the LGBT rights movement and the conservative Government, which has declared it an alien, dangerous “ideology.” President Andrzej Duda, who was sworn in for a 2nd term Thursday, won re-election on a strong anti-LGBT platform, and social tensions have been rising.
Szutowicz was put in pre-trial detention for 2 months for acts of civil disobedience, including using a knife to cut the tires of a van that drives around broadcasting anti-LGBT messages, including a claim that “homosexuals are preparing society to accept pedophilia.” She belongs to a group called Stop Bzdurom ~ “Stop the Nonsense” ~ which has been putting rainbow flags on Warsaw statues, including one of Jesus, infuriating the conservative Government.
Those defending her say that the legal measures being against her are disproportionate. Lawyers have not had contact with her, her defense lawyer said.
Justice Minister Zbigniew Ziobro defended the police behavior as appropriate. He accused opposition politicians who are defending the LGBT protesters of supporting “banditry.” “Perhaps the knife that was used to destroy the van back then will be used for a bigger crime next time,” Ziobro said.
“There can be no license for this type of attack … we have to agree with this and stand together against criminals.” Protesters are further angered because Szutowicz, who was born into a male body and whose name at birth is Michal, has been put into male detention, though she feels like a woman.
Dunja Mijatovic, the human rights commission for the Council of Europe, the continent’s top human rights body, called Saturday for Margot’s immediate release.
“Order to detain her for 2 months sends very chilling signal for #FreedomOfSpeech & #LGBT rights in #Poland,” Mijatovic tweeted. (PTI)